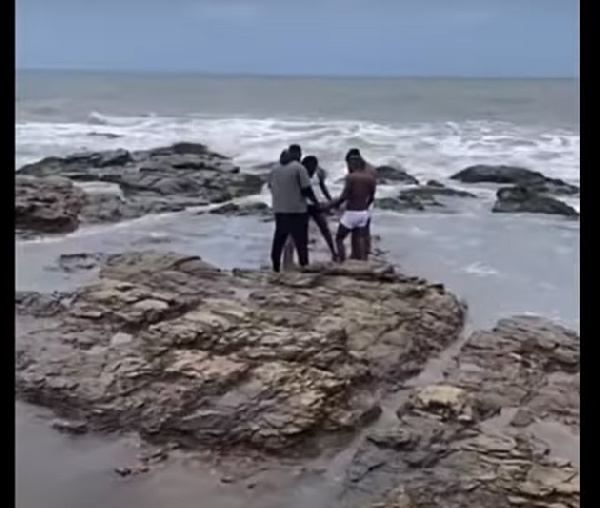 play videoThe five at the sea praying before taking their bath

• Shatta Wale, Medikal and 3 other were granted bail on Tuesday

Ghanaian musicians Shatta Wale and Medikal, together with three others who were granted bail by a court in Accra on Tuesday went to the beach in La to allegedly bath away bad omen that might have accompanied them from prison.

Moments after being granted bail by the court, the five went straight to the beach to take a bath in the sea before proceeding home.

The ritual has been a norm among a number of people who live along the coast.

However, in the absence of the sea, people often go to the stream to take a bath before proceeding to their place of abode.

According to a local historian, Nii Atswele, who spoke to GhanaWeb, “going to prison is considered as a taboo and in most places, ex-convicts are not valued in the society because it is believed they have been blemished.

“So, it’s often done to cleanse ex-convicts. In the absence of water people use mat,” he said.

After spending five days behind bars for the publication of false news and causing fear and panic, dancehall artiste, Shatta Wale, has been granted bail by an Accra Circuit Court.

The musician was granted bail after his lawyers pleaded for same, citing their client’s personality and reputation as reason.

According to them, their client is not a flight risk and will not escape.

The three other accomplices arrested and later remanded with him, Kojo Owusu Koranteng (Nana Dhope), Idris Yusif (Deportee), and Eric Venator (Gangee), have also been granted bail on grounds that they had been counseled, are not flight risk, and will not escape.

Shatta Wale was arrested on October 19, 2021, together with his three friends after faking a gunshot attack.

The Shatta Movement boss was charged with the publication of false news and causing fear and panic.

His cohorts, Kojo Owusu Koranteng, Idris Yusif, and Eric Venator were charged with abetment of crime.

Rapper, Medikal is also in court today, after five days on remand.

He was remanded by a Circuit Court judge in Accra on October 22, 2021, for brandishing a weapon in a video found on social media.

Medikal was charged with the display of arms and ammunition.