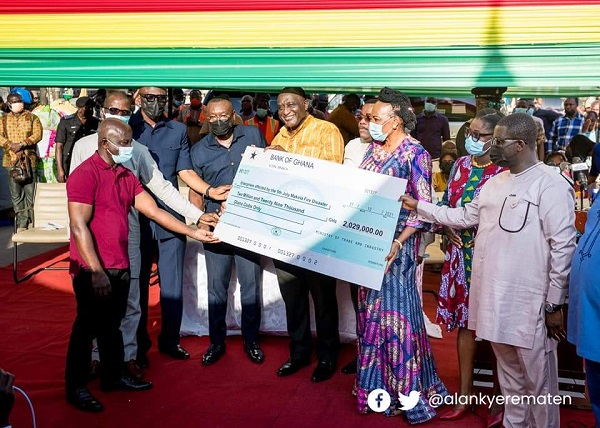 Government through the Ministry of Trade and Industry Minister has presented a cheque for the amount of two million, twenty-nine Ghana Cedis to the recent Makola Market fire victim in Accra.

The emergency financial support by Government was to mitigate the effects suffered by the 98 enterprises.

The fire outbreak which occurred on Monday, 5th July, 2021, gutted a three-storey building with basement leading to the loss of about 300 jobs.

Minister of Trade and Industry, Alan Kwadwo Kyerematen who presented the cheque explained how government remains extremely commmitted to the growth of the Small Scale Enterprises (SMEs) in the country.

He noted that the inclusion of the Development of the SME Sector as part of the Government’s Industrial Transformation Agenda is not just a lip service but one that Government takes very seriously.

“To help achieve this objective, Government, through his Ministry has developed and launched the National Micro, Small and Medium Enterprises (MSMEs) Policy and also transformed the then National Board for Small Scale Industries (NBSSI) into the Ghana Enterprises Agency (GEA) as an apex body to regulate the entire MSME sub-sub-sector” according to him.

In addition, the Minister says another evidence of Government’s attention on the MSME Sector is the strategic decision to support traders and micro enterprises through the provision of emergency liquidity support to the tune of GHS 600 million under the Coronavirus Alleviation Programme Business Support Scheme (CAPBuSS) when the whole world was struck by the COVID-19 Pandemic. 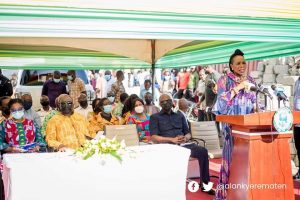 The Minister was full of praise for stakeholder organizations who provided support services to the victims, particularly the Ghana National Fire Service, the National Disaster Management Organization (NADMO), the Ghana Police Service, and the Accra Metro Assembly (AMA).
He singled out the former Mayor of Accra, Nii Adjei Sowah for the leadership he exhibited during the crisis.

It would be recalled that on the 6th of July 2021, the Minister paid a working visit to the scene of the market fire and assured that the Government would provide support to the victims. To this end, he tasked the Ghana Enterprises Agency to liaise with other key stakeholders particularly the Ghana Union of Traders Association, Accra Metropolitan Association (AMA) and the National Disaster Management Organization (NADMO) to determine liquidity relief support to the affected victims. 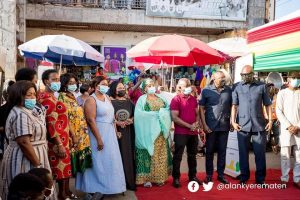 He also tasked GEA to work with the Ministry of Trade and Industry to ensure transparency in the disbursement of funds.