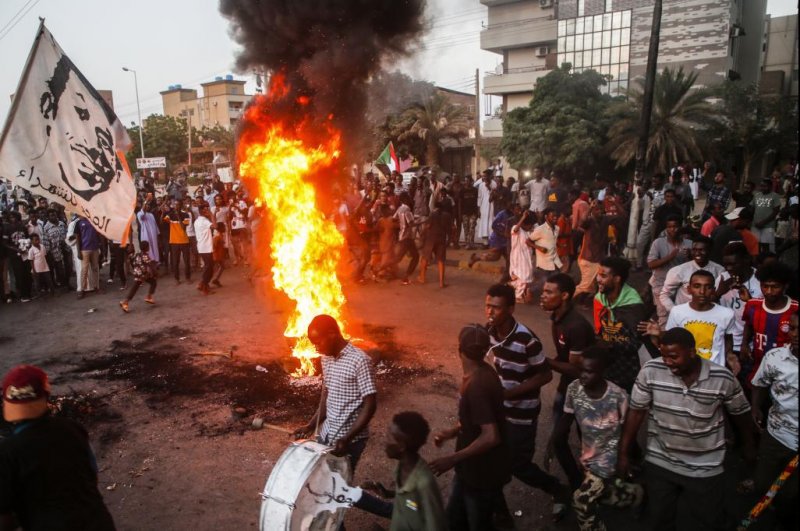 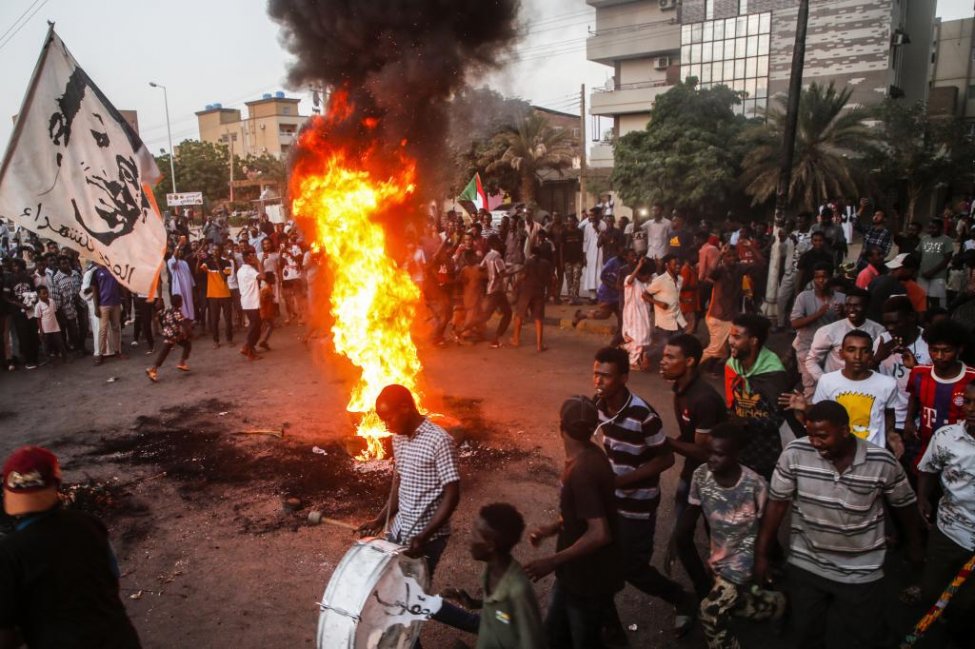 Sudanese protesters chant slogans next to burning tires during a demonstration in the capital Khartoum, Sudan, on Tuesday. Photo by Mohammed Abu Obaid/EPA-EFE

Oct. 27 (UPI) — Resistance and condemnation of the military coup of Sudan grew at home and abroad on Wednesday as the African Union suspended the country’s membership and protests continued within its borders.

The 55-member continental union on Wednesday suspended Sudan with immediate effect from all of its activities after its military seized control of the country in a coup earlier this week and dissolved the civilian-led transitional government.

The expected suspension will be in place until the Transitional Sovereignty Council is effectively restored, the African Union Peace and Security Council said in a statement.

The civilian-led government said it “strongly welcomes” the African Union’s suspension while appealing to the international community “to consider the violations committed against the peaceful revolutionaries in our country and against their rights to express their freedom.”

U.S. Secretary of State Antony Blinken also “welcomed” the the union’s decision to suspend Sudan’s membership in a Wednesday phone call with the union’s commission chairperson, Moussa Faki Mahamat, during which the two “agreed that Sudan must return to civilian leadership.”

The announcement from the African Union was made as the World Bank said it had paused the disbursement of all funds to the country on Monday and urged for the democratic transition process to be restored, “so that Sudan can restart its path of economic development and can take its rightful place in the international financial community.”

The move followed the United States pausing more than $700 million in emergency aid for the country, and on Wednesday the State Department said Blinken asked Sudanese Foreign Minister Mariam al-Mahdi what the United States can do in support of “the Sudanese people in their call for a civilian-led transition to democracy.”

Support for the restoration of the government on Wednesday also came from the Friends of Sudan group of 11 countries, including Canada, France, Germany and the United States as well as the European Union and the United Nations, which issued a statement reaffirming their commitment to the political transformation of the country following decades or dictatorship rule.

“The actions of the security forces deeply jeopardize Sudan’s hard-won political, economic and legal gains made over the past two years and put Sudan’s security, stability and reintegration into the international community at risk,” the countries said. “The aspirations of the Sudanese people for democracy, human rights, peace and prosperity are clear and were reiterated once against last week through protests across the country.”

Meanwhile, dozens of unions and committees in the country pledged Wednesday to continue with protests, night demonstrations, a public strike and to participate in a Saturday parade against the country’s takeover.

At least four people have died and 80 wounded as military forces have confronted protests with live ammunition, according to the Sudanese Doctors Association.

“Since they announced their efforts to undermine civil authority three days ago, the coup d’etat has committed the most egregious violations against the Sudanese revolutionaries and committed violations that amount to war crimes and crimes against humanity,” the spokesman for the civilian-led Sudanese government said in a statement that accused the military of shooting peaceful protests and “practicing the utmost brutality in the streets against passers-by.”

The military seized control of the country early Monday, imposed a state of emergency, dissolved the governing council and arrested Prime Minister Abdalla Hamdok and his wife, who have since been released, as well as a number of ministers and political leaders, who remain detained.

The council of six civilians and five military officers was put in place after the country’s longtime ruler, Omar al-Bashir, was ousted in April of 2019.

Organizations such as the African Union and the U.N. have called for the release of all political detainees.