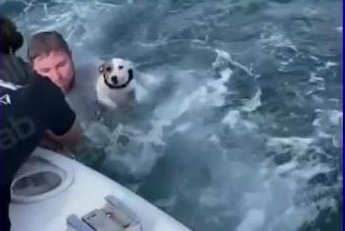 Oct. 26 (UPI) — A group of boaters journeying about a mile off the Florida coast ended up rescuing a lost dog they spotted swimming aimlessly in the ocean.

Bryn Crowell said she and her friends were out on Jakob Dutiot’s boat Sunday when they spotted something in the water about a mile off Fort Lauderdale.

“I saw something in the water and at first I was thinking, like, ‘that kinda looks like a dog,'” Crowell told WSVN-TV. “A second later I realized it was, in fact, a dog.”

Cromwell posted a video to TikTok showing one of her friends, Dylan Berian, jumping into the water and guiding the canine to the vessel, where another friend lifted the dog aboard.

“The dog warmed up to us instantly,” Berian said. “As soon as it got in the boat it was shaking, but after about five minutes the dog calmed down and seemed quite happy to be on a stable boat rather than getting drowned by waves.”

The boaters were able to use information from the dog’s tags to contact his owners, who met them at an inlet about 15 miles away. The dog, named Zuko, had fallen overboard while no one was looking, the owners told Cromwell.

“He was kinda near the back of the boat and just, you know, jumped around and having a good time,” Crowell said.

“But they must have looked away for a minute or two, and by the time they realized he wasn’t there they thought maybe he had gone inside of the boat and they were looking for him, obviously, and then retraced all their steps and panicked at that point.”

Zuko’s family thanked the boaters for rescuing the canine. They said they will be buying Zuko a reflective flotation vest for future boat outings.