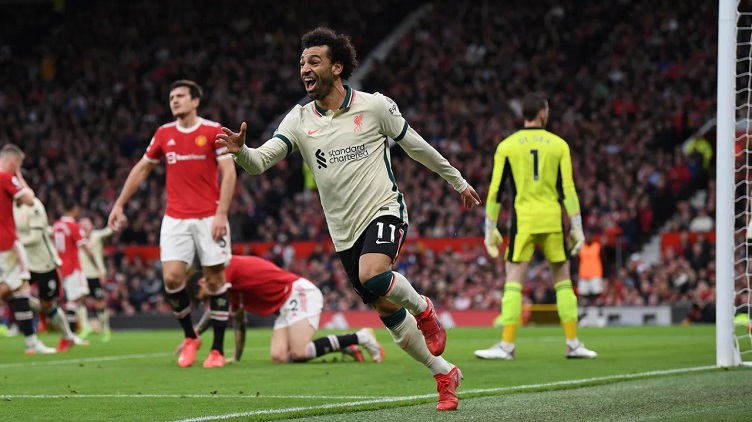 Mohammed Salah celebrates after scoring Liverpool’s fifth goal of the game against Manchester United on Sunday.

Mohamed Salah scored a hat-trick and Paul Pogba was sent off as Liverpool embarrassed Manchester United at Old Trafford yesterday.

Four of the Reds’ five goals were scored in a clinical first-half display as a mixture of poor defending and fine finishing humbled Ole Gunnar Solskjaer’s insipid side.

Naby Keita rolled in the first from Salah’s through-ball to put Liverpool ahead after just five minutes before Diogo Jota slid in a second soon after.

Salah then got his first, smashing the ball into the roof of the net as he scored for the 10th straight game before the Egypt forward made it 4-0 on the stroke of half time with a close-range finish.

There were boos at half time from the home fans but it got worse soon after the restart when Salah scored his third after the in-form forward was brilliantly found by Jordan Henderson.

Cristiano Ronaldo had a goal ruled out for offside before Manchester United’s misery was complete when Pogba, as a half-time substitute, was sent off for a two-footed tackle on Keita after being on the pitch for just 15 minutes.