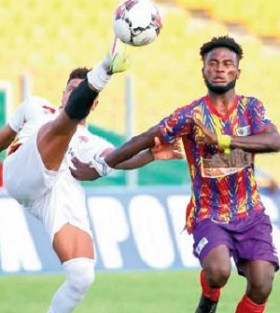 Hearts of Oak have released a statement to fans of the club, reacting to their abysmal performance in Morocco against Wydad Casablanca (WAC) in the CAF Champions League.

The Phobians suffered their heaviest defeat in Africa’s elite competition after succumbing to a 6-1 defeat at the Mohammed V Stadium in Casablanca.

According to the club, the loss serves a huge learning lesson for their ‘massively inexperienced’ team.

Hearts also apologised to their fans for the woeful performance on Sunday night, insisting they will build on the experience.

The Rainbow club will now drop to the CAF Confederation Cup, where they will compete for a place in the group stage of the second tier tournament.

Hearts of Oak will now shift their attention to the defence of their Ghana Premier League title, when they face Legon Cities in the first game of the 2021/22 season.