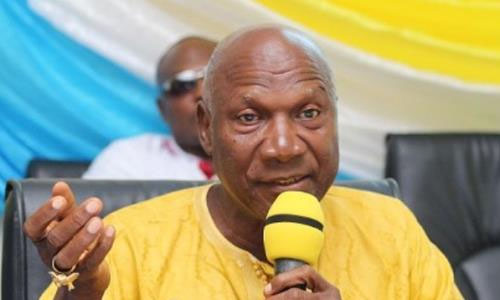 Onaapo the trickster is at it as unusually as he usually does. He has schemed to unsettle a president on course to deliver jobs with an invidious deflection. And he thinks he has successfully masked up his LGBTQ+ dilemma by getting his lawmaker surrogate to secure legislation that would free him from redeeming the promise he made for which he took bribe in 2011 to legislate to sanction same-sex marriage in the motherland.

In his lack for sophistication, he thinks he has correctly read the minds of my compatriots that they are against any such move. But because he keeps trumply dreaming that he stands a good chance of reclaiming the presidency, he needs to inoculate himself against any backlash by ensuring his gay sponsors will blame ɔsonomma for anti-gay legislation while he feigns support for the legislation.

A couple of weeks ago, I touched on the surface of the free the oppressed issue of gay rights by saying what I knew about some of the champions of contrarian constitutionality view who are involved. This time round, I want to try to make sense of clear oppression which is being made not to look as one.

It much sounds like the ‘Promotion of Proper Human Sexual Rights and Ghanaian Family Values Bill 2021,’is untimely; not when we are trying to extricate our economy from the clutches of COVID-19. It’s like stepping on ‘aboananka a ɔda ne dɔtɔɔ mu’ (puff adder minding its business harmlessly in a thicket).

It appears mɔmɔne (salted fish activist provocateurs), who planned the launch of some activities, possibly underestimated the nkura (salted fish craving intolerant assailant mice) in our midst who jumped at the fodder without mercy. Moderation as in keeping the business indoors, appeared to have been misinterpreted by the latter (intolerants) as flaunt and taunt. One would have thought minding business without ceremony would have been the thing and not scenes that appeared to thumb the nose of the nkura by parading as teasing.

A key, anti argument is that same, as against hetero, kills reproduction to procreate. Many fertile women decide not to have children, no matter by whatever means. For the anti-gay who persecute because same discourages procreation, methods have already been developed (test tube, in vitro, surrogacy, adoption, etc.) and many more.

These could be developed, to promote and expand procreation. The super fertile women who wouldn’t mind childbearing, could be organised to produce babies as work. The determination of the so-called straight to quash the small queer proportion of the population, which is not any higher than three-in-one hundred, makes me remember ‘We are many, they are few,’ threats against the g7 dissenting group.

Many of my compatriots might have forgotten; but those of us who have vowed never to allow misdeeds to be repeated still remember the friendship with a known activist who sponsored his book in 2011. Onaapo then pushed his poodle who was with him in his office to skim money from the presidency to bribe and muscle his way into parliament. Now he leads the anti-gay campaign. The strategy is to lay blame on ɔsonomma as passing an anti-gay law in their time. That frees Onaapo from paying his debt of promise to the gay guru to impose ‘gayism’ on the motherland, God forbid, as president again.

My compatriots, please, remember and reflect on selfishness and oppression. Cultures have been growing (cultivating civilisation) by solving problems from the simplest such as ‘accommodating’ the ‘improper’ (easy to see physically challenged disability) to the now complex issue of sex. That, though, never completely resolving them since the most backward elements in society will continue to discriminate no matter what.

Conspicuously missing from the bill are the core family values of empathy and compassion. Instead, what is being promoted is a tyrannical ‘proper.’ A matured society and its culture must espouse caring for each other; rescue the perishing and care for the suffering. I can’t see the biblical and koranic verses that prescribe persecution and proscribe diversity.

Perfection is in imperfection. The contrarians have shown they would not be cowed into submission; no matter the verbal battering or threats. Even preacher people are raining abuses, which may be curses.

It’s about properly tyrannical, proper tyranny of the majority; let’s think about that. Nyameabɔwoyie (you have all the mercies) entiɛtua wo yɔnko ho a ɛtuadua mu (so it’s not me but someone else so I couldn’t be bothered). The verbal assault on those resisting the squashing of our ‘live and let live’ culture, as enshrined in the motherland law of laws, is antichrist and unreligious by all standards.

Wherever there’s money, you’ll find Onaapo. And gay people are largely filthy rich. It’s pitiful that he, Onaapo, the pretender supporter gets all the gay money and those who stand for principles get no money but all the flak. Nyamempangusɛɔbɛdiadeɛ bio (God forbid he’ll ever again mount the deck to pilot the motherland’s fortunes).

Personally, I maintain the greatness of a people, culture, and nation is in the ability of its people to contain prejudice by promoting equality of all. That should include tolerance of differences and promotion of diversity. Whenever and wherever the minority is suppressed, there is resistance that threatens peaceful coexistence and its accompanying chaos and social unrest. For the one who builds a factory without the wherewithal to make it work and turns round to say it is foolish to build a factory without the wherewithal to make it function, that man must be a con like one who sets up lawmaking that he believes in not.