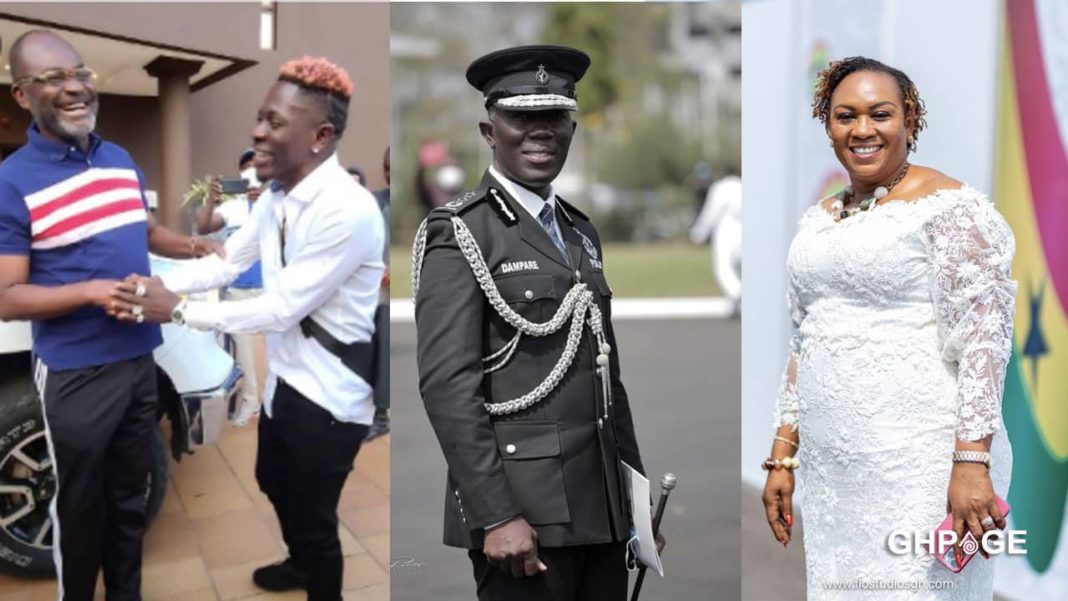 The new Inspector General of Police George Akuffo Dampare has been applauded by some social media users following the way he is handling some cases in the country.

Despite the huge applause he has received from Ghanaians and netizens, some have asked him to arrest politicians Kennedy Ohene Agyapong and Hawa Koomson just to prove the fact that he is not being controlled by the President.

Medikal was picked up last Thursday evening for brandishing a gun on social media. He was yesterday remanded into prison custody for five (5) days.

Hawa Koomson, a member of parliament who should have known better, allegedly brandished a gun at a voting place, according to these enraged social media users.

She was not detained or questioned, and she continues to go around freely as if nothing had happened but Medikal who just posted the gun was picked up by the police for that and is currently behind bars.

Kennedy Agypong, on the other hand, has a history of threatening people on live television and disrespecting judges, including former President John Mahama.

The netizens added that comic actor Funny Face who is battling depression in a live video posted on his social media handle that he would kill his baby mama and later commit suicide was also arrested and has been remanded in police custody.

These netizens believe that as a matter of fair justice, the two politicians also need to be picked up and used as scapegoats for the others.

Read some comments below:

@PaaKwesiJnr: “HawaKoomson pulled a gun and fired in public but she’s walking free KennedyAgyapong threatened a multi media journalist on live TV and he’s walking free Why arrest medikal and shatta wale ?? GP and IGP are in the pocket of politicians”

@Nanafapimso: “U dey want ppl take do scapegoats are Carlos Ahenkorah, hawa koomson and Kennedy Agyapong all dey wey u fit use dem as dat, u lef dem dey use Shatta Wale and Medikal as scapegoats, if God paaa dey erhh.. and he no dey sleep, let him show say he is mightier”

@AikinsAnani: “I want to ask the Ghana Police.
Are they letting us know now that they knew what to do and were not doing it? If they now know how to perform their roles, they should go investigate Kennedy Agyapong and Hawa Koomson. I’ll take delight in that”

@highestblogger: “This IGP dey work for hype but not with integrity or justice.
If he’s really working Kennedy Agyapong and Hawa Koomson must also be arrested, with that we all will say he’s making the law works.
No discrimination.”

@Bukari_Bansuwer: “@GhPoliceService please how special are Politicians from Civilians ?? Why do you give a blind eye to their crimes and put a stiff hand on ours?? We need answers. All of us can’t be politicians so please apply justice and treat us all equally. I hope this isn’t too much to ask”