‘I want to be remembered for my good works, not as Addo guy guy’ – Akufo Addo 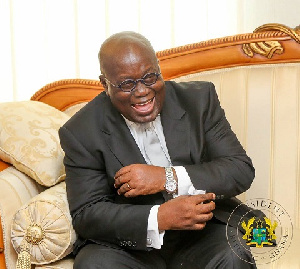 The President of the Republic of Ghana, Nana Addo Dankwa Akufo Addo, has described how he would want to be remembered at the end of his mandate.

Akufo-Addo, whose presidential mandate comes to an end in 2024, explained that he would want to be remembered as the former president who came to make serious contributions to Ghana’s development

He continued that he would also want to be remembered as somebody who made a significant impact on the development especially on the national economy which is backed by data.

“Somebody who came to work hard for the people of Ghana, somebody in whose period the system of government was strengthened and deepened.

“Somebody who made a significant impact on the development especially of the national economy and that you can compare the data at the beginning of my mandate and at the end of my mandate to see that there has been a significant improvement and enhancement of the living standard of our people and quality of life and who generally came to make a serious contribution to Ghana’s development. That is how I would like to be remembered, Apart from Addo Show Guy and Addo Preman,” Akufo-Addo added.

Commenting on his successor in the NPP, the President of the Republic of Ghana, Nana Addo Dankwa Akufo Addo, asked the New Patriotic Party (NPP) to ensure a ‘manipulation free’ process in choosing the party’s next flagbearer.

Akufo Addo called on the NPP to ensure that the process to elect the Party’s next flagbearer is transparent as possible, adding that any crack in the party will go a long way to affect the general elections and ultimately the country.

Asked whether or not he would vote to elect a flagbearer, Akufo-Addo answered in the affirmative failed to mention who he would vote for.

The NPP is expected to hold its presidential primary in 2023.