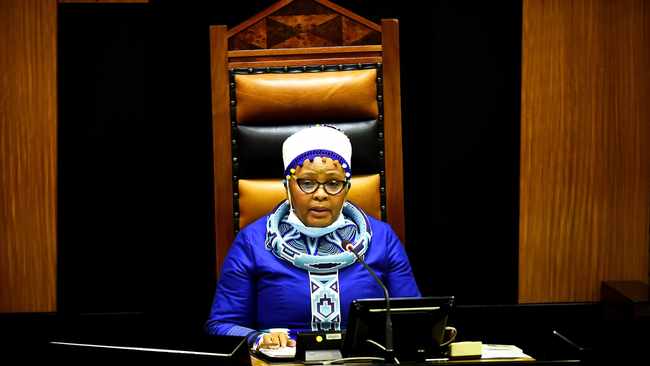 Pretoria – Speaker of the National Assembly Nosiviwe Mapisa-Nqakula will lead a high-level delegation of the Parliament of South Africa scheduled to meet a Chinese delegation at a virtual meeting on Friday to discuss matters of mutual interest, including the ongoing fight against the Covid-19 pandemic and strengthening trade and economic relations.

The Chinese delegation will be led by the Chairperson of the Standing Committee of the National People’s Congress (NPC) of the People’s Republic of China, Li Zhanshu.

Parliamentary spokesperson Moloto Mothapo said: “This meeting is part of strengthening relations as outlined in the memorandum of understanding (MOU) signed in 2006 between South Africa’s National Assembly and China’s National People’s Congress”.

He said one of the terms of the MOU is a regular exchange mechanism meeting, which includes:

* The exchange of views on bilateral and multilateral issues of mutual concern;

* The promotion and facilitation of exchange visits, tours and seminars, as well as all requisite support to make the engagements worthwhile;

* The exchange of information and publications on a range of developmental areas, including the strengthening of democracy, legal systems and communication, and sharing best practices; and

* Tracking progress in implementing the existing agreements between the two governments.

Mothapo said the meeting on Friday also presents an opportunity for the exchange of best practices on parliamentary governance engagements at two levels.

Information from the Chinese Embassy in Pretoria shows that in 2019, the two-way trade between China and South Africa exceeded $42 billion (R608.7 billion), accounting for one-fifth of the total trade volume between China and Africa.

There are more than 200 Chinese enterprises in South Africa, with a total investment and financing of more than $25bn, creating 400 000 jobs for local people, according to the Embassy.

Despite the impact of the Covid-19, the China-South Africa practical co-operation and bilateral trade have maintained strong momentum and great resilience.