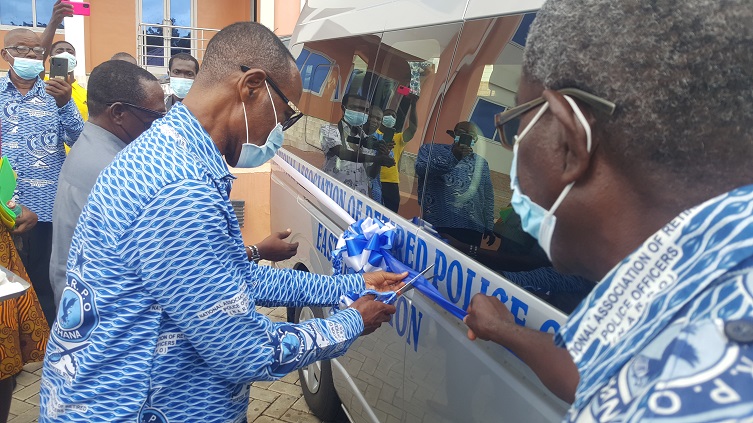 A brand new Toyota Hiace mini bus has been presented to the Eastern Regional Chapter of the National Association of Retired Police Officers (NARPO) to meet their welfare needs.

The chapter was also presented with an amount of GH¢100,000 cedis for the construction of their ongoing office complex.

The National President of the National Association of Retired Police Officers (NARPO), Commissioner of Police (COP) Joseph Boakye-Appiah (rtd) said Volta Regional Chapter of the association was the first to receive a welfare bus and a cash of GH¢100,000 for their office project.

He said Bono Region which followed the Eastern Region received a welfare bus, adding the other regions will have their share when funds are available.

At a colourful ceremony held at the National Secretariat located at NARPO-GH Hostel in Accra, the association President outlined the aims of the association which includes not only the welfare, social and economic needs of members but also to enhance their quality of life.

“Since assuming office in January this year, my administration has prioritised the support for the base of the association which is the regional and district levels.

“It is the aim of my administration to improve the administrative and operational structures of the association at these levels,” he noted.

COP Boakye-Appiah maintained that his administration is prioritising the provision of logistics to the regional branches to enhance their effectiveness both administratively and operationally.

“We are also providing office equipment including computers with the necessary accessories such as scanners and printers to some of the regions. All these are geared towards the improvement of the administrative structures of the regions to ensure effective and timely communication of needs between them and the national secretariat,” he added.

He urged the leadership of the regional branches to ensure that the facilities being provided are taken good care of and also used for the intended purpose.

DSP Emmanuel Sampson Som Koranteng (rtd), chairman of the Eastern Regional Chapter of the association, expressed appreciation to the national executives for prioritising those at the regional and district levels.

Reverend Friar George Arthur, Director in charge of Religious Affairs of the Ghana Police Service was at the function to bless the bus before the official handover.

Treason trial: They promised to take our passports and give us visas