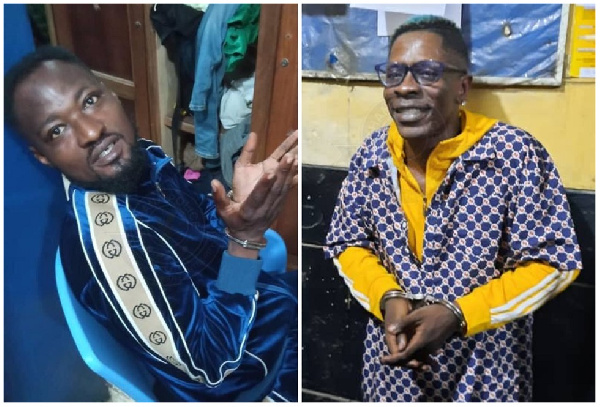 • Both celebrities have been arrested by the police

• Funny Face believes they both didn’t heed to advice

In a video sighted by Ghanaweb, Funny Face, originally known as Benson Nana Yaw Oduro Boateng, intimated that they didn’t heed to good advice from the public.

In the viral video, Funny Face said, “Yo, Yo, Yo Gh Hyper, guess what me and homie de[are] here. Big up Shatta Wale. We no de hear.”

According to the comic actor, he has been insane for a while now but hopefully, he intends to undergo rehab and come back with a sound mind.

“For now I craze small but I will come back. If I come back everything will be all right,” Funny Face said from the police cells.

The Cow and Chicken actor added, “My craziness is like light off, it’s no and off. I didn’t talk to anyone in the morning but this evening the craziness said talk to people.”

However, on Tuesday, Shatta Wale also surrendered himself to the Ghana Police Service after he was declared wanted along with an aide.

Shatta was arrested to assist with investigations into an October 18 viral post that he had been a victim of a gun attack which he subsequently confirmed as a hoax.