Watch: Couple in flooded India region float to wedding in a cooking pot 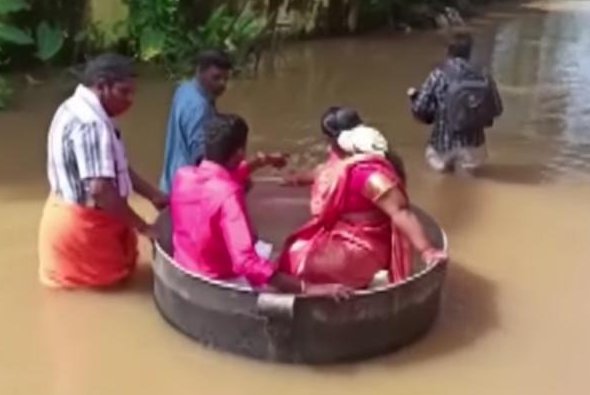 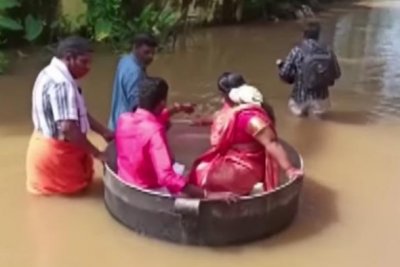 Oct. 20 (UPI) — An Indian couple living in a region that experienced severe flooding took an unusual vehicle to reach their wedding venue — a cooking pot.

Akash Kunjumon said he and his wife, Aishwarya, were legally married Oct. 6, but their wedding ceremony was planned for Oct. 18.

Kunjumon said the ceremony was originally to have been held at a temple at Thalavady, but recent floods caused the religious building to be filled with water, so the event was moved to a nearby hall with a stage that had not been submerged.

“Although we tried to arrange a small boat to reach the venue, none was available,” Kunjumon told The Hindu.

He said officials at the temple provided an alternative solution.

“People from the temple arranged the pot for us,” he told The Washington Post.

The couple climbed into a large cooking pot, and a video shows them being pushed through the floodwaters to reach the event hall.

“We traveled in that pot for at least 20 minutes to get to the venue,” Kunjumon said.

He said the volunteers pushing the pot had to fight “a strong undercurrent” to get them to their wedding.

“My father swam to the temple and my mother, grandmother and sisters used another pot,” Kunjumon said. “The photographer had to struggle. But he knew the story and was ready to take the risk.”