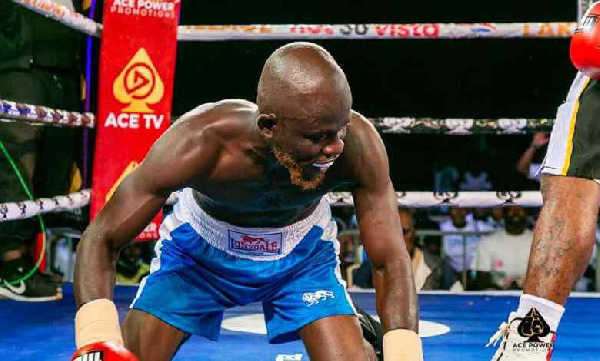 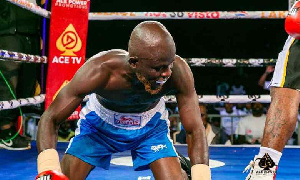 Robert Quaye aka “The Stopper” needed only one round to finish Nathaniel Nukpe in the main of the “Danger Zone” boxing event which took place last Saturday evening at the La Palm Royal Beach Hotel in Accra.

The unbeaten Quaye won the UBO super lightweight title and said it will inspire him to go for the bigger belts in the days ahead.

Quaye started the fight in an aggressive mood by attacking his opponent with wild punches and sent him to the canvas getting to the last ten seconds. The bombardment was enough for Nukpe to call it quits.

Nukpe told XYZ Broadcasting Media team in a post-match interview that he was referred and introduced to the crowd as a Togolese instead of being Ghanaian, by the ring announcer, so he decided to quit the bout because he feared he could be charged for impersonation when the Republic of Toge get to know.

His decision not to continue surprised the audience, especially Ace Power Promotions officials.

Featherweight boxers, Holy Dorgbetor (8-0, 5 KOs) and Success Tetteh (10-3, 8 KOs) put up a great performance which took the shine from the headline bout earned Dorgbetor a 12-round unanimous decision to win the national featherweight and UBO titles.

“This is a big win for me and I’m glad to have won these great titles,” Dorgbetor said after the fight.

Defeated Tetteh called for a rematch, but Dorgbetor said he has to move on to face bigger challenges.

Tanzania’s Loren Japhet (11-5-2, 3 KOs) got a second-round knockout win over Nigerian Sherif Kareem (9-4, 7 KOs) in their super bantamweight contest, while Raphael King stopped Emmanuel Allotey in round five of a welterweight contest.

Emmanuel Quartey aka “Akufo-Addo” beat Billy Quaye in round two in their super featherweight fight.