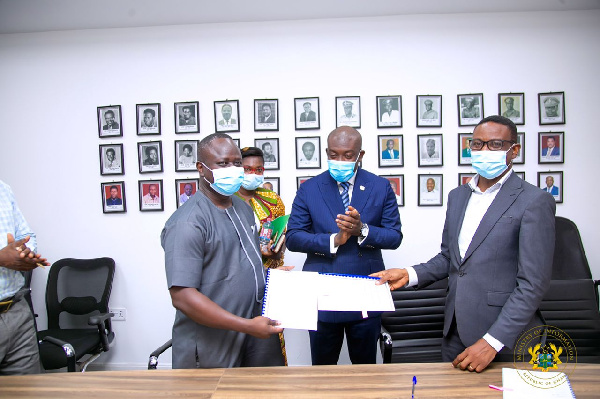 The signing was done at a brief ceremony in Accra on Tuesday, October 19

A Memorandum of Understanding (MoU) has been signed between the Ministry of Information (MOI) and the Ghana Statistical Service as part of efforts to retool the Information Services Department (ISD) in order for it to deliver on its mandates.

The MoU, which was signed between the two parties seeks to train officers of the Information Services Department (ISD) in all Metropolitan Municipal and Districts Assemblies (MMDAs) in the country on how to gather information that will guide the government in the implementation of its policies.

The signing was done at a brief ceremony in Accra on Tuesday, October 19, 2021. Speaking after the ceremony, Minister for Information, Kojo Oppong Nkrumah under whose purview the ISD directly falls, pointed out that the partnership could not have come at a better time than this.

He said in an age where almost everything is driven by information gathering and scientific research, this partnership will help enhance the ISD’s research unit so much so that it can gather feedback from the public and send the same to the government for further policy actions.

“This is a very important step in an exercise to reorganize the ISD and it is born out of an internal identification of an opportunity and a challenge. The ISD traditionally compiles what it calls Public Reaction Report (PRR) where when something occurs in one part of the country, in any district, they will put together a report and share same with the Minister responsible for Information who will then share same to inform central government understanding of what is going on.

“We identified when I assumed office a few years ago that there was an opportunity and a potential to convert this Public Reaction Report into a more scientifically-driven research instrument that can guide the Government of Ghana, regardless of which government is in power, on what the people of Ghana really think about specific matters and the kind of interventions they will want to see implemented,” he added.

On his part, Prof, Annim stressed the need for state-owned enterprises to tap into the GSS’ know-how to improve on their workflow as mandated by law. He said the collaboration will help improve ISD’s information gathering processes pledging the support of his outfit to see to it that the ISD is repositioned as a research-oriented department of the Ministry of Information.

Mr Amoah bemoaned the absence of information gathering systems that will see to it that the ISD makes meaningful inputs into government decision making processes. He said however that, with the coming into force of the partnership with the GSS, the ISD can now gather feedback and relay same to the government for further policy actions.