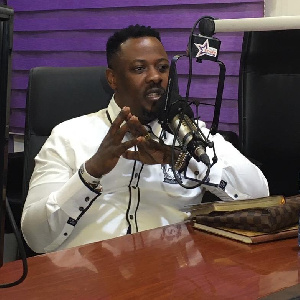 A prophet from Prophetic Hill Chapel, Nigel Gaisie is advocating for the Member of Parliament (MP) for Ningo-Prampram Constituency to be allowed to contest unopposed in the National Democratic Congress’ (NDC) upcoming primaries.

On the Anopa Bↄfoↄ morning show on October 18, 2021 the clergyman revealed that efforts will be made at sabotaging Samuel Nartey George popularly known as “Gyata” in his quest to run for the third time as MP at the primaries.

The legislator, currently serving his second term, is one of eight Parliamentarians who presented the anti-LGBTQ+ bill titled “Bill on the Promotion of Proper Human Sexual Rights and Ghanaian Family Values” to Speaker of Parliament, Alban Sumana Kingsford Bagbin on June 29, 2021.

The bill seeks to criminalise activities including the promotion, advocacy and funding of the community, which has received support from a section of the public including religious organizations and civil society groups.

But Mr. Nartey George’s opposition, according to Nigel Gaisie, will rise on the back of the lead role he plays in the fight against the legalization of the LGBTQ+ activities.

“They [LGBTQ+ promoters] will fight him to lose the primaries…I have seen as a prophet that he has put his hands on his head grieving over the loss of his seat…They will do everything for him to lose it.”

“If I were to be them [NDC leaders] and if it is within their laws and by-laws, I would let Sam George go unopposed to make a statement to the world” Prophet Nigel added.

Lauding the anti-LGBTQ+ advocate for this braveness at pushing for the bill to be passed by Ghana’s Parliament, the leader of the church noted that Sam George’s works will remain a legacy in the annals of history even if it does happen that he loses the seat.