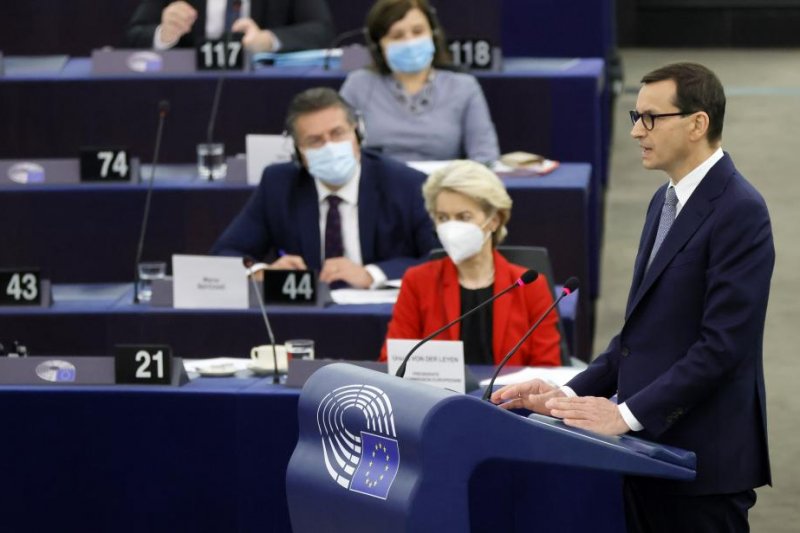 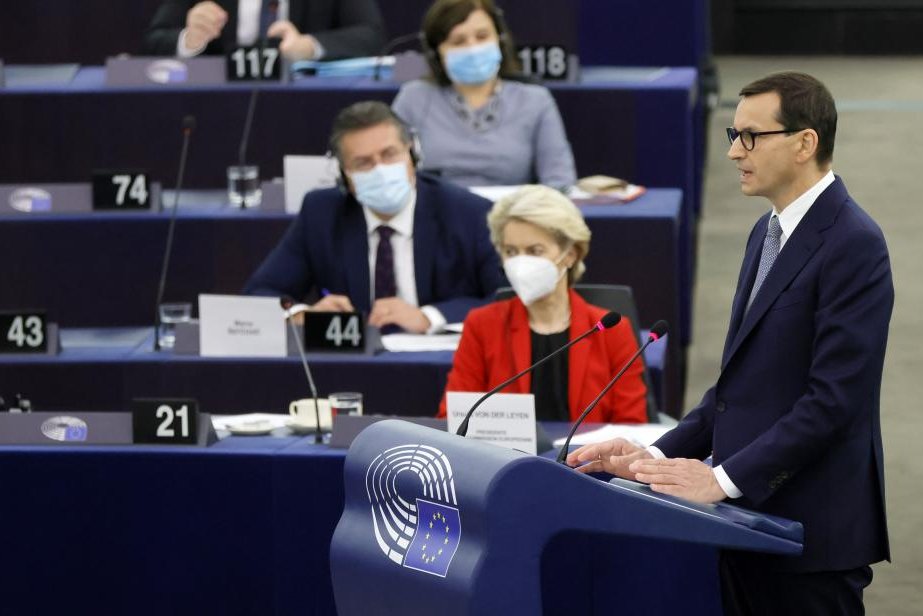 Poland Prime Minister Mateusz Morawiecki (R) speaks during a debate on “The Rule of law crisis in Poland and the primacy of EU law” during a session of the European Parliament in Strasbourg, France. Photo by Ronald Wittek/EPA-EFE

Oct. 19 (UPI) — A fight over a recent court ruling that says the laws of Poland effectively supersede the laws of the European Union spilled into the bloc’s parliamentary chamber on Tuesday, between top leaders on each side.

The clash came about a week after Poland’s Constitutional Tribunal ruled that the laws of the Eastern European nation take precedence over EU treaties. The ruling has drummed up concern in the alliance over its effect on EU governance — and has even led some to call for Poland to leave the European Union.

Some of the issues of recent concern between the two sides include press freedoms and gay rights.

Von der Leyen said the constitutional court’s ruling amounts to a direct challenge to EU rules, and argued that it could ultimately weaken the 27-member alliance.

“The ruling calls into question the foundations of the European Union,” von der Leyen said. “It is a direct challenge to the unity of the European legal order. Only a common legal order provides equal rights, legal certainty, mutual trust between member states and therefore common policies.

“This is the first time ever that a court of a member state finds that the EU treaties are incompatible with the national constitution.”

“The people of Poland wanted democracy,” she added. “They wanted the freedom to choose their government. They wanted free speech and free media. They wanted an end to corruption and they wanted independent courts to protect their rights.”

In his remarks, Morawiecki argued that the EU may be seeking too much authority over its member states.

“The highest law in the EU is the constitution of a country,” Morawiecki said, according to Politico. “The EU will not fall apart simply because our legal systems will be different.

“If you want to make a non-national superstate out of Europe, first get the consent of all the European states and societies.”

The Polish leader acknowledged that most citizens of his country want to be part of the European Union, but he pushed back against the EU’s rule-of-law principles.

“It is the strongest best developed international organization in history, but the EU is not a state,” he said.

German Chancellor Angela Merkel and other EU leaders have urged patience and further dialogue in navigating the issue with Poland.