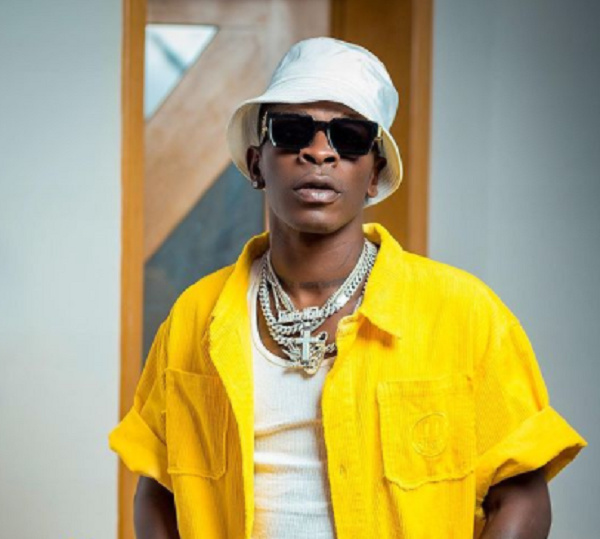 b>• Shatta has received numerous death prophecies from pastors

• The dancehall artiste has survived all of such death prophecies

• Shatta Wale is unhappy with being associated with death prophecies

On three consecutive occasions, some Ghanaian pastors have publicly predicted several instances of death Shatta Wale was likely to encounter.

These pastors during sermons and media interviews predicted doom for the dancehall artiste and also disclosed ways by which he was scheduled to die.

In some instances, Shatta received the predictions in good faith, in other situations, he condemned and called bluff the pastors carrying the message.

Interestingly the Shatta Movement boss has survived all of such prophecies.

Head pastor of the Newlife Kingdom Chapel International, Bishop Stephen Kwasi Appiah, aka Jesus Ahuofe, predicted that Shatta Wale will be shot by some unknown gunmen on October 18, 2021.

In an interview with Accra FM’s Nana Romeo, the pastor said God revealed to him in the spiritual realm that the Dancehall artiste will be shot dead on a day after his birthday.

He also advised the musician to run to any powerful man of God of his choice to pray for him and avert the calamity.

“On October 18, 2021, a big calamity will befall Ghana. Ghanaians should pray for our musicians, especially dancehall music performers. I saw in my vision that one had lost his life. What occurred on October 18, 2007, in South Africa is going to happen in Ghana. The person is a popular dancehall artiste in Ghana. In the spiritual realm, I saw that he was attacked by armed robbers and was shot dead. He needs to consult a man of God to pray and redeem him. I saw this while praying, but in Ghana, when you prophesy, you will be attacked. His first name is Charles. He should pray seriously,” the pastor said.

2. Shatta Wale was predicted to die in an accident in 2018

Sometime in 2018, the Founder of Zion Miracle Worship Centre, Prophet Stephen Kwadwo Adom, prophesied that Shatta Wale will die in a fatal car accident before the year ends.

The pastor paused in the middle of a sermon and told his congregation that Shatta Wale might die on Christmas Eve, December 24, 2018.

“God said I should tell Shatta Wale that if he is not very careful and cautious, he will be involved in an accident in December and die,” the prophet stated.

It can be recalled that the prophet Adom’s prophecy triggered a response from Shatta Wale in which he vowed to burn down all churches if he survives that particular year.

However, Shatta Wale survived the year and even went ahead to organize a thanksgiving concert at the Mantse Agbonaa park in Accra on January 2, 2019.

3. Shatta received another death prophecy in 2018

Prophet Cosmos Walker Affran in 2018 wrote in a Facebook post that Ghanaians should pray for Shatta Wale as the spirit of death was hovering around him.

In a Facebook post, the prophet stated that God revealed to him that Ghana was plunged into a state of mourning due to the death of the dancehall artiste.

“Ghana should pray, I see a national mourning again the whole nation was in tears and this time it is Ghanaian singer Shatta wale, and it is very close “death” Thou saith the Lord,” he wrote. 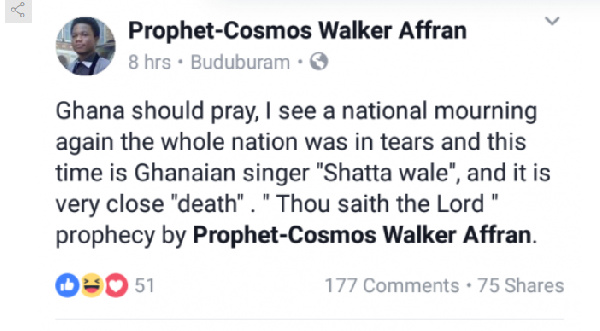