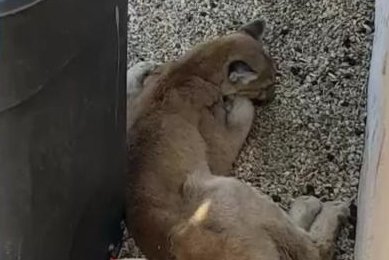 Oct. 19 (UPI) — Wildlife officials in California said they successfully captured a mountain lion that wandered into a condo complex and climbed a tree.

The California Department of Fish and Wildlife said residents of the Sunrise Palms Condominium Community in Palm Springs contacted authorities Monday morning when they spotted the mountain lion in a back yard.

Fish and Wildlife officials responded alongside Palm Springs Police and animal control officers to tranquilize the cougar, which was found in a tree.

Officials said the feline was found to be underweight and injured.

“The decision was to guard it and relocate it but after looking at the health of the lion, it was really emaciated. Looked like he got hit by a car possibly because all the nail beds were fractured,” Fish and Wildlife lieutenant supervisor Kyle Chang told KESQ-TV. “I think that it came down here probably hunting because it’s a juvenile smaller cat. It might have gotten kicked out of its territory — home territory and it’s looking for its own territory.”

Chang said the mountain lion was taken to a rehab facility in San Diego and will be released back into the wild once it has recovered.