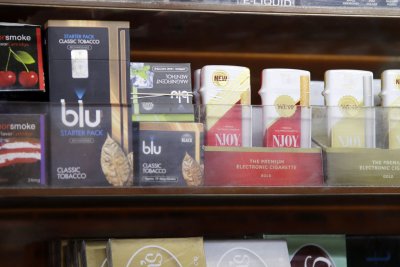 Oct. 19 (UPI) — Cigarette smokers who switch to vaping are less likely to successfully quit traditional cigarettes and more likely to continue using them than those who quit tobacco, a study published Tuesday by JAMA Network Open found.

They also are at higher risk for smoking relapse than those who switch to other “combustible” tobacco products, such as cigars and pipes, the researchers said.

Just under 42% of smokers who moved to e-cigarettes were not using traditional cigarettes at least one year or more after making the switch, the data showed.

However, 36% relapsed and were smoking cigarettes one year or more after switching to vaping.

In comparison, more than half of study participants who stopped using tobacco completely still were not smoking cigarettes one year later, though just over one-third relapsed.

“Quitting smoking is one of the most difficult things to do because of the addictiveness of nicotine,” study co-author John Pierce told UPI in an email.

Many of the health complications caused by cigarette smoking can be traced to “the tar that smokers ingest when they get their nicotine from burning tobacco,” said Pierce, a professor of family medicine and public health at the University of California, San Diego.

As a result, there is an “idea that they can reduce the likelihood of health consequences by switching to products that don’t require burning tobacco for them to get their nicotine,” Pierce said.

However, “our research indicates that smokers do better by quitting nicotine completely, not switching to another nicotine source,” he said.

About 40 million adults in the United States smoke cigarettes, and nearly 5 million middle- and high-school students use at least one tobacco product, the Centers for Disease Control and Prevention estimates.

Roughly one in four smokers switches to e-cigarettes to quit the habit, research suggests, even though these devices are not an recognized as a smoking cessation treatment, according to the CDC.

Pierce and his colleagues’ findings are based on an analysis of the tobacco-use habits of nearly 14,000 smokers over a more than one-year period.

Just over 9% of the study participants attempted to quit smoking during the study period, with 23% switching to e-cigarettes and 18% using these devices daily.

About 63% of those who attempted to quit stopped using tobacco altogether, while the remainder used other tobacco-based products.

“This study does not focus on e-cigarettes as an aid for smoking cessation,” Pierce said.

“We were focused on whether those who were able to switch completely to e-cigarettes were able to maintain using this source of nicotine without relapsing to cigarette smoking [and] we could find no evidence to support this,” he said.

A separate analysis of Food and Drug Administration-approved methods for smoking cessation, also published Tuesday by JAMA, found that combining the drug varenicline and the nicotine patch was no more effective than using varenicline alone.

Just under 25% of smokers treated with varenicline, marketed as Chantix, among other brands, and the nicotine patch for either 12 or 24 weeks had not smoked within the previous seven-day period when assessed one year later.

However, this figure was actually slightly less than that for participants treated with the drug alone, the researchers said.

“Varenicline is an extremely effective treatment for smoking,” study co-author Timothy B. Baker told UPI in an email.

“Our research shows that varenicline when used for 12 weeks, and with no other medication, is optimally effective, which is important since it can save patients hassle and perhaps money,” said Baker, a professor of medicine at the University of Wisconsin in Madison.