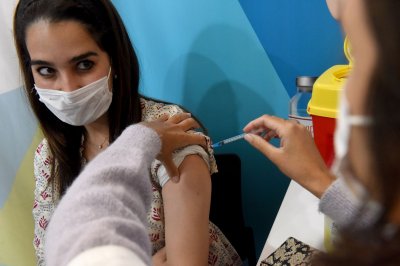 Oct. 19 (UPI) — The two-dose Pfizer-BioNTech vaccine is 93% effective at preventing hospitalization due to severe illness from COVID-19 among teens ages 12 to 18 years, according to data released Tuesday by the Centers for Disease Control and Prevention.

This was true even during the period when the more contagious Delta variant of the virus was “the predominant” one in circulation across the country, the agency said.

The Delta variant also has been linked with more serious illness, particularly among young people.

“This evaluation demonstrated that two doses of Pfizer-BioNTech vaccine were highly effective in preventing COVID-19 hospitalization among persons aged 12 to 18 years,” the CDC researchers wrote.

This study focused on the Pfizer-BioNTech vaccine because the Moderna shot had not yet been cleared for use in teens when it was conducted, the agency said.

The one-shot Johnson & Johnson vaccine has not yet been cleared for use in people age 18 and younger.

The findings of the study are based on an analysis of data on 464 teens ages 12 to 18, 99 of whom, or 21%, were fully vaccinated, meaning it had been at least two weeks since they had received a second dose of the Pfizer-BioNTech vaccine.

More than 330 of the teens included in the study had at least one underlying health condition that put them at increased risk for COVID-19, the researchers said.

In addition, 205 of the study participants had attended in-person classes at school during the time of the analysis, which was conducted from June 1 through Sept. 30.

Of the 179 study participants who tested positive for COVID-19 and developed symptoms, 3% were fully vaccinated, the data showed.

Among those sickened with the virus, 77, or 43%, were admitted to an intensive care unit, or ICU, and 29, or 16%, were considered critically ill and received life support during hospitalization, including invasive mechanical ventilation.

Two of these 29 critically ill patients died from the virus.

All 77 case-patients admitted to the intensive care unit, all 29 critically ill case-patients and both deaths occurred among unvaccinated study participants.

Meanwhile, only six of the fully vaccinated teens in the study required hospital care, and none was admitted to the ICU or died.

Unvaccinated teens hospitalized with the virus spent about five days in the hospital, on average, compared to three days among those fully vaccinated, the data showed.

“This evaluation demonstrated that nearly all persons aged 12 to 18 years hospitalized with COVID-19 were unvaccinated,” the agency researchers wrote.

“[It] reinforces the importance of vaccination to protect U.S. youths against severe COVID-19,” they said.