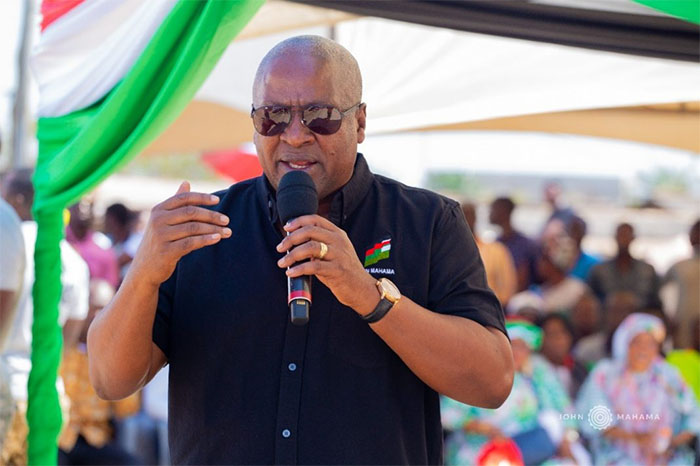 Former President John Dramani Mahama has said the NPP used what he called arm twisting tactics to take the Hohoe seat from the National Democratic Congress (NDC) in the Volta Region during the 2020 general election.

Since 1992, the NDC has been holding the Hohoe seat until the last election when John Peter Amewu who was then the Energy Minister and now Minister for Railways Development, caused an upset by winning the seat to enable the NPP to get a parliamentary seat in the Volta Region for the first time.

Mr. Mahama, commencing his ‘Thank You’ tour of the Volta Region, called the historic NPP victory as ‘arm twisting’.

“There are 18 constituencies in the region (Volta), you gave us 17 and I know that even Hohoe we would have won but for the arm twisting that took place,” he said on Global FM in Ho yesterday.

He said the Volta Region which is known in political parlance as the World Bank of the NDC, did not disappoint the party during the election, saying they added an additional 113,000 votes to the party’s votes.

Mr. Mahama claimed that the deployment of military personnel to collation centres forced some electoral officers to declare results in favour of the NPP.

“But for a lot of scheming that took place, the NDC would have won the election. I do believe that we did win, but a lot of things went untoward and so even though power did not come into our hands, it does not mean we do not have the prospects of winning.”

“We won the majority in Parliament, but you saw what happened on the day. Many of the polling centres injected soldiers and forced the electoral officers to pronounce results that were not real.”

He also said the NPP intimidated the people in the region, claiming “despite all the intimidation that took place, despite the locking of the borders, despite bringing soldiers to intimidate our people during the registration and all, if you look at the votes in the Volta Region, it helped to increase us from where we were at about four-point-something million to almost six-point-something million and in Volta Region alone, we got 113,000 additional votes so you didn’t disappoint us.”

He said the EC’s inability to organise election in the new constituency called Santrokofi, Akpafu, Lolobi, and Likpe (SALL) due to the creation of the Oti Region from the Volta Region had been designed to steal the seat for the NPP.

“As we sit here, the people of Santrokofi, Akpafu, Lolobi, and Likpe (SALL) have no representative in Parliament and all these were carefully designed to take that constituency from us,” he said.