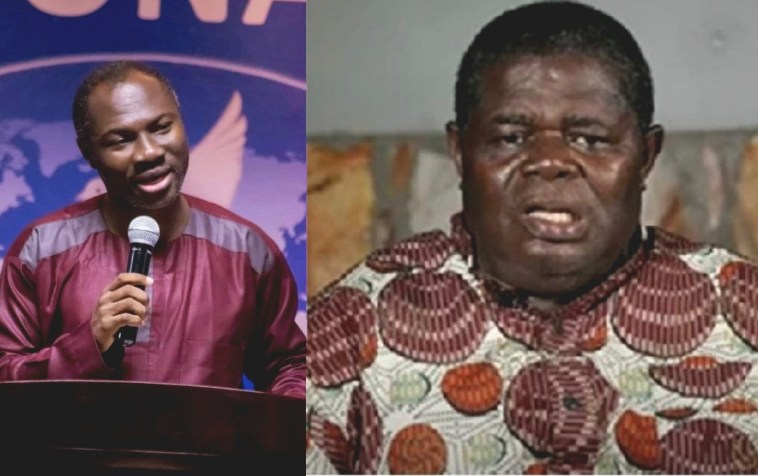 Actor Mr. Beautiful recently revealed in chit-chat with Sammy Kay that Rev Badu Kobi handed over a huge sum of money to Psalm Adjeteyfio to build his own house.

However, Psalm Adjeteyfio who is affectionately called TT spent the money and has now turned into a social media beggar who has fast become a nuisance.

After earlier denying that he was giving a huge sum of money to build his own house at Dodowa after visiting Rev Badu Kobi, Psalm Adjeteyfio has now come out to confess that he squandered the money.

In the voice of Psalm Adjeteyfio, his ex-wife was the one who made it impossible for him to build his own house after he received the money from Rev Badu Kobi.

Speaking in an exclusive interview on Happy FM with Kwabena Boafo, the award-winning actor admitted that he was being controlled by the ex-lover.

In his own words, she was very authoritative and wanted things to be done in her own way.

Speaking on what he used the money for, he accused the ex-wife of manipulating him to use part of the money to rent a full house and spending the rest on “useless” things.

TT also added that his wife sacked his kids from him and he was not able to do anything about it because she was in full control of their relationship.

He is reported to have said;

“She was impatient and always wanted things done her way and was always getting me angry. She always did what I did not like so there was no peace and joy in our home. It was always full of misunderstandings.

“If you have no peace in your house, it becomes evident in everything you do and this was my story when it came to my wife. She always did what I asked her not to do and that really got to me”.

Touching on the issue that he abandoned his children in his hay days, Psalm Adjeteyfio had this t say;

“I did not abandon my children. I just had to give them space because of my wife’s actions and I did not want what was happening to us to affect them. I really appreciate them and all they did, especially my eldest son Ezra. They all stood by me in my struggles all these years.”

Besides, TT also dropped a profound message for men who cherish looks more than character. He advised that it is better to marry an ugly woman with a good character than a beautiful one with the devil’s soul.