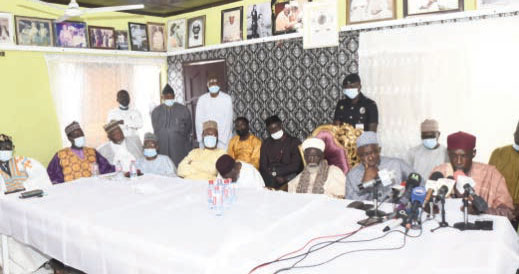 A scene during the press conference

The leadership of the Ghanaian Muslim community has made it abundantly clear that it does not subscribe to “the deviant sexual orientation referred to as LGBTQA+ and its related offshoots.”

It has also thrown its weight behind the anti-LGBTQA+ bill which has been laid before the current Parliament.

These were put out during a joint press conference under the auspices of the National Chief Imam, Sheikh Osman Nuhu Sharubutu, at his New Fadama residence last Wednesday.

At the press conference were representatives of the various Islamic sects such as the Shias, Ahlun Sunnas, Ahmaddiyas and members of the Council of Zongo Chiefs.

“We wish to indicate that the issue confronting us as a nation and the dangers it poses in the long run goes beyond human right and constitutionality. It is about our dignity as a nation and time-honoured family values,” the leadership said.

Islam as a faith and system of life stands diametrically opposed to LGBTQA+ and all its ramification as damnable, morally objectionable, publicly and socially reprehensible and above all a subject of divine prohibition on a number of grounds which include among others damnable moral perversion capable of evoking divine anger, the leaders said. Islam as a way of life, the leaders went on, “upholds a belief in the sanctity, values and necessity of the family institution as a unit of society built on the foundation of marriage between the members of the opposite sex.” Same sex marriage and the related sexual aberrations, in the Islamic view, constitutes a violation of natural order and a war against the very survival of the family and its values, the leaders stressed, adding “we believe that marriage between males and females is key to the actualisation of the divine plan to keep the family in perpetuity for the multiplication and long term survival of the human species as made abundantly clear in the Qur’an.”

The leaders hold the view that beneath the view points of the proponents of LGBTQA+ “are hedonistic and humanistic philosophical inclinations which make complete nonsense of God’s involvement in human affairs.”

The enterprise of such proponents, according to the Muslim leaders, is an attempt to declare the Almighty God absolutely irrelevant and unnecessary in the affairs of man.

To equate the secularism of Ghana as Godlessness, for the leaders, is conceptually incorrect.

Secularism for them “is the practice in governance where no one religion is made dominant to the exclusion of others. Contrary to being considered Godless, Ghana is a secular state with a deep sense of God.”