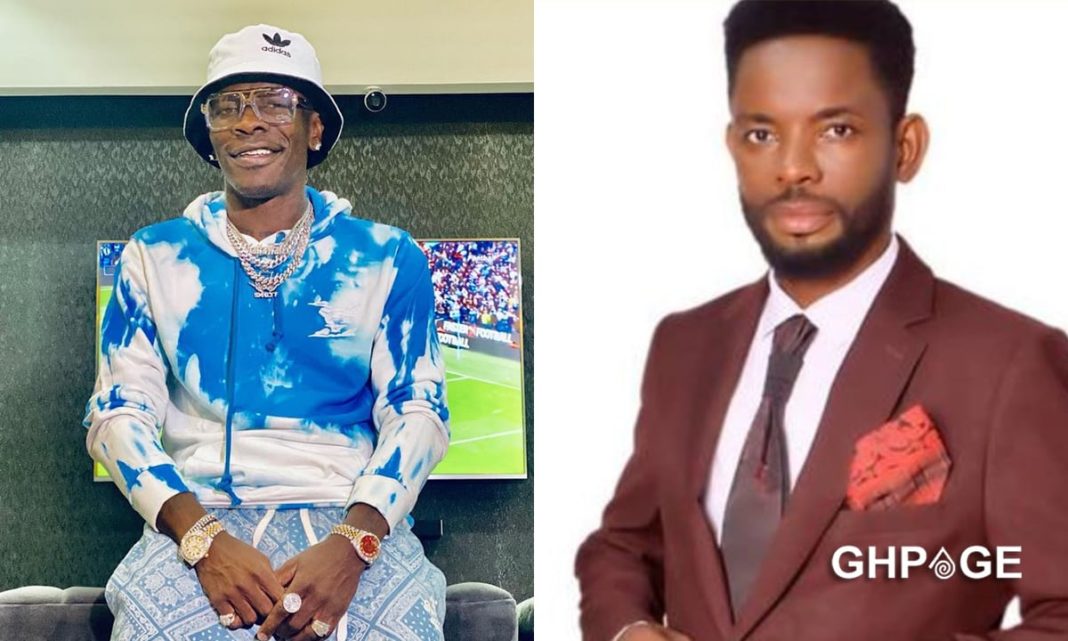 Pastor, Jesus Ahuofe who prophesied Shatta Wale will be shot dead on October 18 has been arrested.

We are told that the popular man of God was arrested earlier today in the studios of Accra FM when he was preparing to go live to have an interview with Nana Romeo.

Recall, on September 28, 2021, in an exclusive interview with Nana Romeo Jesus Ahuofe revealed that doom awaits one of Ghana’s famous musicians in the dancehall genre, Shatta Wale.

The General Overseer of New Life Kingdom Chapel International mentioned that Shatta will be shot dead just like how Legendary Lucky Dube was shot on October 18th 2007.

WATCH THE VIDEO BELOW:

In other related news, Shatta Wale has broken silence after the news went viral yesterday evening that he had allegedly been shot and was currently in the hospital receiving treatment.

Following the news which was revealed by Nana Dope who happens to be the road manager of Shatta Wale a lot of people started asking questions.

A few hours later, the Ghana Police Service released a statement saying they had contacted some people closer to the musician who told them they are not aware of any attack on the musician.

The police statement continued that they have gone around some hospitals and none of them has any information on Shatta Wale.

Well, Shatta Wale has broken his silence from wherever he is saying that he would continue to be on the run until he knows the laws in Ghana are working.

According to him, a prophet made a threat on his life but the Ghana Police didn’t do anything about it and this has gotten him into a violent mood.

He added that he wouldn’t wait for the Police and other people to tell his fans and family that he has been shot and killed by some unknown persons.

Read his full statement below:

Psychological, or emotional trauma, is damage or injury to the psyche after living through an extremely frightening or distressing event and may result in challenges in functioning or coping normally after the event.

The statement made by this false prophet has gotten me in a mood of violence since no one in this country cares.

So the police of this country want to tell me none of them saw those threatening statement online to take Action ?

This pastor said 18th October shatta wale will be shot and you want to tell me you didn’t see from you cyber crime department nor did u hear or came across anything like that online ?

If my life can be threatened and there is no law to take actions on that then I guess I will do what is right in the eyes of God.

This is not the first time I have had these threats in this country am now I am going these emotional trauma alone ,

My dad has even defended me on radio on this same issue .why ? Why ? Ghana ? Why ?

Yes ,my life is in Danger and am on the run till this country shows me there are LAWS..

Deportee am sorry for taking your phone

Dope sorry for taking your phone

To my fans am sorry but I will have to fight this fight alone and get it done ..

To my Dad I say sorry for putting you thru stress

PASTORS ALWAYS SAY THINGS AND LATER PLAN EVIL TO IT ,SO THAT ME AND YOU WILL BELIEVE THEY ARE POWERFUL MEN OF GOD ..

THE YOUTHS OF THESE COUNTRY ARE TIRED OF RELIGIOUSNESS ,WE KNOW GOD ALREADY AND THAT IS THAT .

IF THIS WILL MAKE ME STOP MUSIC LIKE HOW MANY WANT ME TO STOP ,
THEN SO BE IT CUZ I AM TIRED OF THE NEGATIVITY IN THIS COUNTRY.