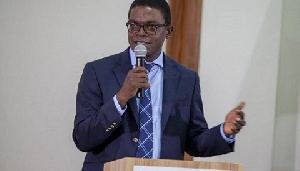 • He says appointment based on political commitment is flawed

•MMDCEs are appointed by the president

Executive Director of the Institute for Democratic Governance (IDEG), Emmanuel Akwetey, has said the appointment of Metropolitan, Municipal, and District Chief Executives (MMDCE) based on their political commitment and contribution towards a party winning the election is defective.

This mode of appointment according to Emmanuel Akwetey is flawed and discriminatory.

Speaking on Citi TV’s Point of View he said “the bigger question is can we continue with a flawed system, a system that has been breached so fundamentally? Look at the mode and criteria on which MMDCEs were nominated – your standing relationship with the party was number one and number two was whether you made some contributions to their winning elections or mobilizing people and the third was your competence.

“If you become the person the president appointed, do you have the capacity to govern, especially your likability in relation to chiefs and ethnic groups? The true identity of any democracy is your citizenship. That comes first and that is the basis for dealing with us equally.”

He added that political parties must come together to build a consensus on how the appointment of the MMDCEs will be addressed.

“We are in a historic situation where the two giants [NDC and NPP] want to reform the local government, and that kind of reform in a democratic system requires that a durable consensus is built between the two.”

The Local Government Minister Dan Botwe officially released the list of Metropolitan, Municipal and District Chief Executives (MMDCEs) on the official website of the Information Ministry on September 19, 2021.

The president appoints the MMDCEs and with not less than two-thirds of the assembly votes are needed to be confirmed under Chapter Twenty of the Constitution in Article 243.

The MMDCEs provide political and administrative leadership in the next three-and-a-half years.

Their place in the Metropolitan, Municipal and District Assemblies, and their functions are given under Article 243 of the Constitution and Section 20 of the Local Governance Act, 2016 — Act 936.