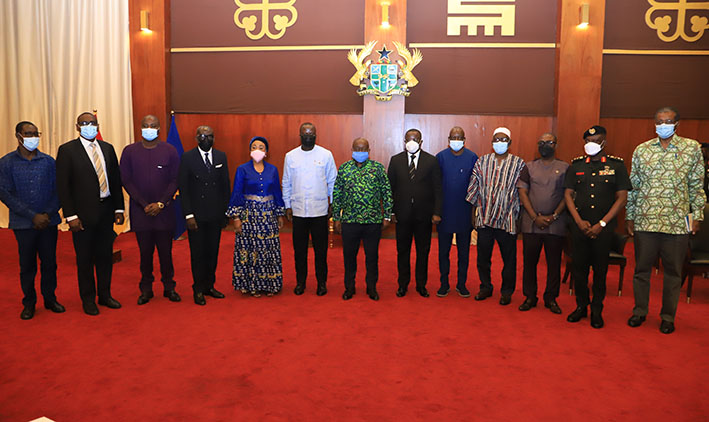 President with members of the board

President Akufo-Addo has said the seeming boundary issues between Ghana and some neighbouring countries could explode if not well-handled.

Swearing in members of the Governing Board of the Ghana Boundaries Commission (GhBC) which is chaired by the Minister for Lands and Natural Resources, Samuel Abu Jinapor, last Friday, the President said “an extensive analysis of our borders for example shows numerous recorded cases of distractions at the boundary markings of our demarcated lands and maritime boundaries.”

This situation, according to the President, “exposes us to security, economic and other developmental implications including setting the tone for potential conflicts with neighbouring countries,” adding, “we still have a number of boundary disputes with our neighbours, both land and maritime.”

Based on the concerns, President Akufo-Addo charged the Governing Board of the newly constituted board of the commission to spearhead the amicable resolution of all existing border and maritime boundary disputes to avert any potential conflicts in the future.

“We are told by the Institute of Security Studies that African maritime boundary disputes for example, that, unless resolved in a concerted and timely manner, will impair both the long and short term implementation of maritime policies and strategies,” he noted with concern.

The President stressed the need for African states and stakeholders to prioritise boundary dispute resolution, if a vital maritime economic development is to occur.

“There are also ongoing efforts to settle border problems with Burkina Faso in Paga, in the Kassena-Nankana District, and Sapeliga in the Bawku West District, both in the Upper East Region.

“The vast amount of mineral resources along our borders including in the famous dollar power, in the Savannah Region, makes it imperative that we conclude these matters once and for all to forestall any potential needless conflicts,” he emphasised.

On his part, Chairperson of the Governing Body of the Ghana Boundary Commission said their task was consequential to the peace and security of the nation and assured the President that they would work hard to protect Ghana’s territorial integrity.

Ghana Boundary Commission (GhBC) exist to ensure that Ghana’s land, maritime and air boundaries are effectively secured and managed within the framework of International Law, Peace and Security, and the African Union (AU) and Economic Community of West African States (ECOWAS) Protocols on African and Regional Integration.

It has as its mission to demarcate, delimit and manage Ghana’s international and internal boundaries, including settling boundary disputes through the implementation of National Legislation, and Regional and International Conventions on boundary management and cross-border cooperation in Africa.