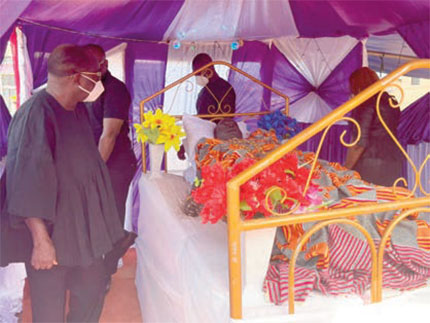 Freddie and Gina Blay filing past the remains of Tom Fox

The mortal remains of Daily Guide’s sub-editor, Samuel Thomas Fosu Jnr, have been interred at his hometown, Agona Duakwa in the Central Region.

The final funeral rites took place on Saturday, October 16, 2021 at the family house at Agona Duakwa, followed by a thanksgiving service at the Ebenezer Methodist Church at Agona Duakwa on Sunday.

Sympathisers including the management and staff of Daily Guide, the Parliamentary Press Corps, GIJ Alumni (Class of 1995), old students of Adisadel College (Santa 89 Year Group), and friends were present to pay their last respect to the late Fosu Jnr.

NPP Chairman Freddie Blay, his wife Gina, who is Ghana’s Ambassador to Germany and an entourage from Accra were in Duakwa to mourn with the family.

Apart from the hefty donations made, Mr. Blay promised to sponsor the education of Thomas Fosu’s two sons.

The children of the late Thomas Fosu Jnr., Nathaniel Fosu and Daniel Fosu, described their father as a man of few words but jovial, and was passionate about their education.

“You promised to sponsor our education to any level we wanted. But, Dad as you are gone now, who would see to this?” Nathaniel quizzed. 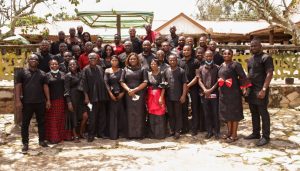 He eulogised their father for the love, care and affection he showed them saying, “Daddy we will remember you for taking us to many places of interest during vacation. If we have a choice to make, we would wish to have you here to complete the plans you had for our future. We are grateful to God that he gifted you to us for all these few years.”

The staff of Daily Guide in their tribute said the late Thomas Fosu Jnr was an example of a journalist dying in action as soldiers do when they lay down their lives on the battlefield.

“We shall remember him for his sense of humour and affableness which earned him the nickname TomFox or Nii Fosu in the news room,” the tribute read.

Mr. Fosu was Daily Guide’s correspondent in the Eastern Region for over two decades, and was also the immediate past Parliamentary Correspondent of the newspaper.

On the day of his untimely demise, Mr. Fosu covered the NPP press conference at the party’s national headquarters at Asylum Down, Accra, but felt unwell soon after composing his story at about 4:50 pm.

He passed on at the Greater Accra Regional Hospital, otherwise called Ridge Hospital, where he had been referred to from the Nima Government Clinic, also in Accra.