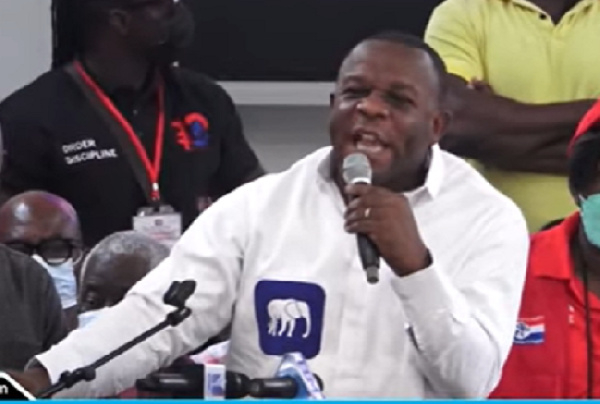 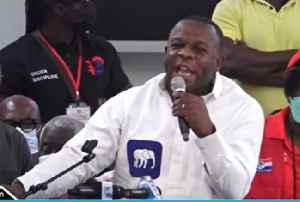 Lord Oblitey Commey is Director of Operations at the Presidency

The former Deputy Minister for Youth and Sports, Joseph Yamin, has said that the Director of Operations at the Presidency Lord Oblitey Commey and the New Patriotic Party (NPP) will rather beg to hand over the power to the National Democratic Congress (NDC) if the party wins 2024 general elections.

The Director of Operations at the Presidency, Lord Commey has declared that the governing NPP will do all it takes to retain power when next elections are held in 2024.

According to him, the NPP will retain power adding, “If God blesses you with power and you don’t grab it well, you will regret what would happen to you.”

He added, “Never again is what we should resolve leaving this conference this afternoon. Never again that this thing [acrimony] will ever happen to this party. Break the 8 has become the slogan but as I stand here and so far as I live I won’t break any eight (8).

“The power I have, I would not hand it over today nor tomorrow. There is no 8 to be broken. I’m continuing. Breaking the 8 slogans is denigration. As if there is something indeed to be broken.

“We have the power and what is left is for us to sustain the power. We have a president who now says I would hand over to the next NPP Presidential candidate as President of the Republic of Ghana,” he told the cheering crowd.

Joseph Yammin reacting to Lord Commey’s comment on his Facebook page sighted by MyNewsGh.com emphasized that the NDC will rescue Ghanaians from President Akufo-Addo’s poor leadership through determination and vigilance

According to Joseph Yammin, “If Ghanaians vote for NDC in 2024, Lord Commey and his NPP are cowards to say they won’t hand over the power to the NDC.

“So far as some of us are still alive, the NDC which contested 2020 elections with soft hands will be different from NDC contesting the 2024 general elections,” he said.

“Lord Commey is the most coward person in the NPP but he is just bragging because he met members of NPP. We are all in this country and if NDC wins the 2024 elections, who is Lord Commey to say NPP will not hand over the power to NDC”

Joseph Yammin added, “Ghanaians are suffering under President Akuffo-Addo’s government and NDC party which was intimidated and cheated in 2020 will be different NDC going into 2024 elections.

“If some of us lead the party as executives, Lord Commey and NPP will know that the NDC party is not soft and can never be intimidated as he and his party think.”