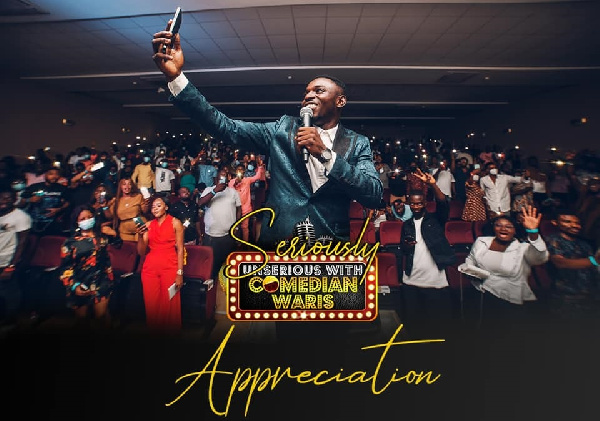 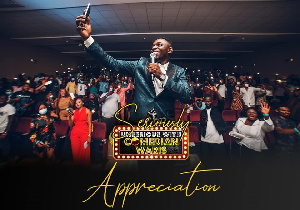 Comedian Waris in a photograph with patrons

It was a full house as hundreds thronged the Snap Cinemas, Accra, Saturday to watch Comedian Waris perform as a headliner of a show for the first time, six years after venturing into standup comedy.

Considering that the event was widely publicized with a tall list of performers which included colleagues DKB, OB Amponsah, Lekzy Decomic, Alo Wess and MJ the Comedian, patrons were in anticipation of a great night.

These comedians took turns to entertain the audience with witty jokes that evoked boisterous hilarity, setting the tone for the climax of the show. Their acts were interspersed with an eclectic mix of musical performances from 2020 Vodafone Ghana Awards New Artiste of the Year, Fameye; his ‘successor’ Mr. Drew; and Kri8 ’s Shuga Lord.

Costumed in a slim-fit suit with white sneakers that brightened his feet, Comedian Waris mounted the stage amid resounding cheers from the audience whose desire to watch the man of the night, had at this point, reached a crescendo.

His entry, although not the most epic and not the most dramatic, got off well when Black Sherif’s ‘Second Sermon’ played in the background. This song was relevant to that entry because it also sums up Comedian Waris’ life experiences in Accra, having endured struggles ranging from economic quandary to disappointments.

For close to an hour, Comedian Waris entertained patrons with a variety of content. His rib-cracking script captured the standard of living in the country, complex relationships between individuals and groups, soccer as well as social deviance.

Born Abdul Waris Umaru, the comedian used the opportunity to encourage persons who may be swamped with challenges to not lose faith but keep their hopes alive for a change in the narrative.