You spoke to me and I did not listen so what, f̷u̷c̷k you- Moment Funny loses his cool on Adebayor despite getting two cars from him and several expensive gifts (Watch) 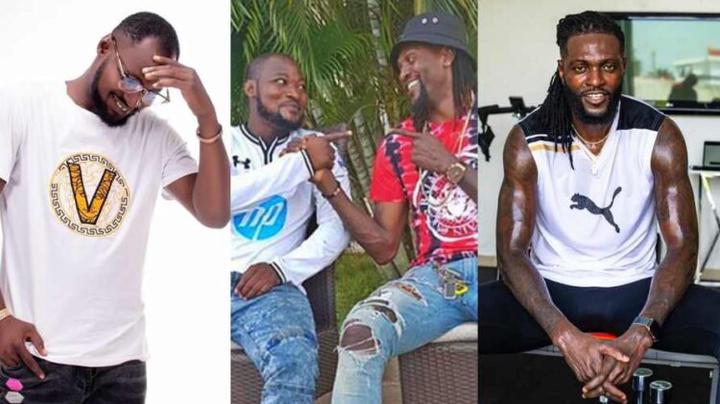 Funny Face has slammed his old-time friend and benefactor Emmanuel Adebayor in a shocking twist that adds to the depth of the issues he has eating up his brains.

In a new video causing massive waves on the internet, Funny Face bit the hands that have been feeding him all this while saying: “Adebayor, for unfollowing me, F**k you. A friend stick to a friend no matter what. You spoke to me and I didn’t hear so what? Nigga, f**k you”, Funny Face fired.

He then attacked the CEO of EIB Network, Bola Ray for terminating from Kasapa FM where he used to work even though he had done a lot of work on EIB’s Starr FM earlier.

Moreover, he launched a scathing attack on Fadda Dickson for siding with his baby mama Vanessa instead of listening to his side of the story when he recently had an accident.

In what looks like glimpses of his declining mental faculties, the creator of Cow and Chicken said he could not believe someone like Fadda whom he has been with since 2007 can ‘bailout on him’ by pitching allegiance with Vannesa instead of listening to him first.

According to Funny Face, if he had died in that particular accident, Fadda Dickson would have been to his funeral and donated a huge amount of money because everyone knows they are very close.

Recall that back in August, Funny Face revealed in an Instagram post that he nearly died from a ghastly accident he was involved in on the Accra-Kumasi highway in the early hours of Sunday, August 29.

The Ghanaian comedian and father of three said he was on his way from Accra to Kumasi to see his baby mama Venessa who he intends to marry very soon and officially beg his family for all the drama that he got embroiled in with her months ago.

He said one careless driver driving a huge articulator nearly rammed his car but he swiftly avoided it. He narrated his ordeal in a video he shared plus a brief caption he added to it.

He wrote at that time thus;

“I was crossed by an “ Articulator “ I had to swerve him .. Nearly died !! Hmmm .. WHO JAH BLESS NO MAN CURSE !! NANA YAW ODURO BOATENG BENSON RICHMOND … you have suffered in dis life 😭👑🇬🇭🙏🏾✊🏾 BUT JEHOVAH will always watch your back !! Forever to JEHOVAH alone be da glory ✊🏾🔥👑❤️🇬🇭🕊🙏🏾”