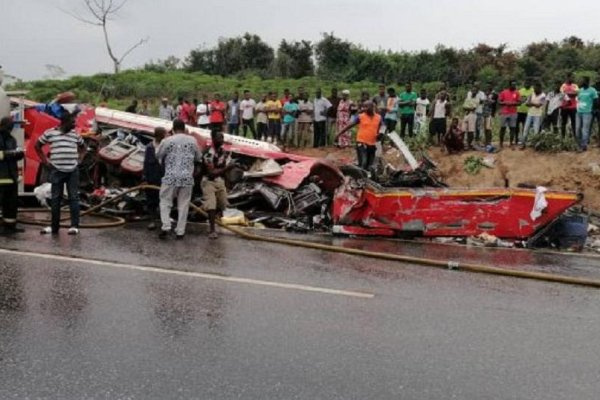 Ninety-one people have been killed through road accidents in the Western Region between January and September this year, as against 78 in 2020.

Out of the figure, 75 were males against 16 females, according to Nana Akua Ansaah, the Regional Director of Road Safety Authority.

She said the Region also recorded 167 pedestrians knock-downs as against 130 cases last year.

Nana Akua Ansaah who made this known to the GNA in Takoradi, said there was significant decline in the number of persons injured within the period.

According to her, out of a total of 1,199 vehicles involved in accidents 526 persons sustained injuries against 654 cases last year.

According to her, 316 motorcycles, which resulted in 29 deaths and 176 people seriously injured was also recorded.

On Motor Traffic offences, Nana Akua Ansah said a total of 435 cases including, over speeding, over loading, drunk driving, worn out tyres, without licence, expired documents, not wearing helmet and not wearing seat belt were recorded.

The Regional Director said a total of 358 of the cases were sent to court of which 308 were convicted, 38 awaiting trial, 77 under investigation, one on beach warrant, two jailed and nine discharged.

Nana Akua Ansaah said the Authority was focused to its task to develop and promote road safety in the country to co-ordinate and regulate activities, procedures and standards related to road safety and to provide for related matters.

She called on all stakeholders to promote best road safety practices among all categories of road users in the Region as the yuletide approached.