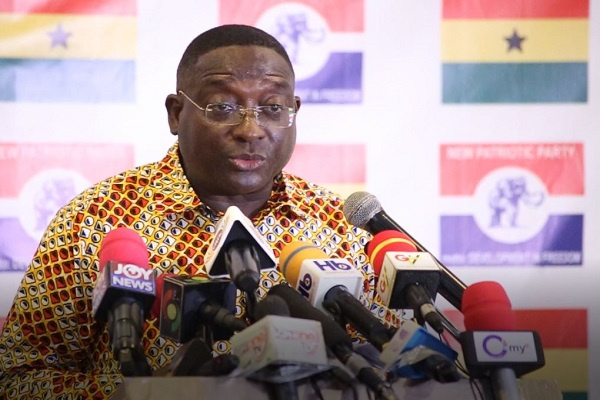 Director of Communications of the NPP, Mr Yaw Buaben Asamoa

The governing New Patriotic Party (NPP) has said the Presidential Candidate of the National Democratic Congress (NDC), former President John Dramani Mahama is deceiving himself and his supporters regarding the outcome of the 2020 general elections which he lost.

Director of Communications of the NPP, Mr Yaw Buaben Asamoa noted that Mr Mahama’s posture does not edify the sacrifices of Ghanaian voters who defied the existence of the coronavirus to exercise their franchise during the polls.

His comments come after Mr Mahama has attempted to discredit the work done by the Chair of the Electoral Commission (EC) Jean Adukwie Mensa in the 2020polls.

Mr Mahama said that he will score Mrs Aduwkei Mensa F on how she conducted last year’s elected.

“2020 was Ghana’s worst election. If I was marking her, I would have given her an F. She is marking her own paper after examination so she can give herself any mark she likes.

“Tell me which election in Ghana was ballot papers printed yet one million ballot papers were found elsewhere… We didn’t witness this under Dr Kwadwo Afari-Gyan. She [Jean Mensa] knew there was ballot stuffing,” he said as part of his thank you tour.

His comments come after Mrs Mensa has expressed pride in the process and outcome of the December 7, 2020 elections of Ghana, recommending same to other West African nations.

She said Ghana’s latest election has become a case study for most advanced democracies in the world that they are ready to take a leaf or two from it.

She made this known on Wednesday, October 13 while speaking at the opening of the High Level Meeting of the Parliament of the Economic Community of West African States (Ecowas) in Winneba, Central Region.

“To the glory of God, I am pleased to say that Ghana held an election in December 2020 that prove the story of elections in our sub-region can indeed be an inspiration.

“That our story as West African states has been one that brings hope to our youth and light to the coming generations and that we can provide best practices the most advanced democracies of the world can learn from. Yes, we can!”

She described the elections as “historic” in many ways.

“I humbly refer to Ghana’s 2020 elections as historic for the transparency, the credibility, the cost-effectiveness, the high turn-out and the peaceful conduct that characterized it.

“So orderly, so methodical, so calm were the polls on the 7th of December, 2020 that BBC could find no other way to describe our elections than boring.”

Addressing a press conference in Accra on Friday October 15, Mr Buaben Asamoa who is also a former lawmaker for Adenta said “Only losing candidate Mahama and his cabal in the NDC continue to deceive themselves about the outcome of the 2020 elections . The heart-warming record of achievement that the conduct of the elections chalked deserves better from the one who seeks to lead the country coming next elections.

“In fact, his posture on the election does not edify the sacrifice of Ghanaian voters who queued in defiance of covid-19 to register and vote. Often, the same breadth, he reminds Ghanaian families of the pain of losing loving ones during post votes collation by mischievously referring to the regrettable deaths .

“President Akufo-Addo is on record as saying that not a drop of Ghanaian blood is worth exchanging for electoral victory and the steps he took against vigilantes literally ensured them the most peaceful voting process ever. In the 2020 elections we didn’t hear anything about vigilante groups, the BBC described the elections as boring, as the electoral commissioner has said.

“True leadership will not focus on the unfortunate and painful situation for political gains to the detriment of national peace of mind . In any event, former President and candidate Mahama has a very poor record in terms of political violence. He is the one who brushed aside the infractions of the Talensi by-election when guns were flowing about including the vehicle of his party’s National Chairman.”