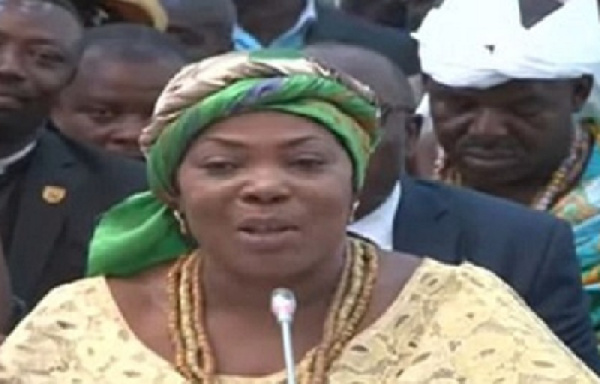 Hon Elizabeth Kwatsoe Tawiah Sackey who was sworn into office by the Greater Accra Regional Minister, Hon Henry Quartey together with 25 other Metropolitan, Municipal, and District Chief Executives in Accra at a brief ceremony held at the Ghana National Association of Teachers (GNAT) Hall in Accra on Friday took the oaths of office and secrecy.

Mrs. Elizabeth Naa Kwatsoe Tawiah Sackey, who is the first female Chief Executive of the AMA was confirmed on Thursday, October 7th in accordance with Section (20) 1 of the Local Governance Act, Act (936) after she secured 30 out of the 30 votes cast, representing 100 percent of the total valid votes cast.

Hon Dan Botwe, Local Government, Decentralisation & Rural Development Minister in a remark reiterated the functions of the MMDCEs as enshrined in the Local Governance Act, 2016 (Act 936) and urged them to liaise with the Traditional Authorities and stakeholders to foster consensus-building.

He also urged Assembly members to consult their electorates before attending Assembly meetings and report back to them after meetings as stipulated in the law.

He also assured that the ministry would ensure that the Local Governance Act, 2016 (Act 936) functions.

Hon Henry Quartey, the Greater Accra Regional Minister, charged the newly sworn-in MMDCEs to lead in the effective mobilisation and utilisation of the available human, financial, and material resources in their local environment to bring development.

“There is, therefore, no time to waste. Your work starts immediately you leave here… It is no more business as usual and we at the RCC shall deploy all the monitoring tools to ensure that you perform your mandated duties without fail…As the Chief Representative of the Central Government at the District level, you will be required to provide leadership in the effective mobilization and utilization of the available human, financial and material resources in the local environment,” he said.

He also admonished the new MMDCEs to adopt an open-door policy, make consultation a priority as well as set high moral standards.

“As you take office, I urge you not to be carried away by the perks of your office, to lord your authority over the very people you have been appointed to serve, let us not be armchair MMDCEs. Instead, humility and service to our people should be your guiding principle. Eschew arrogance and make yourself available to the service of your community. I believe it is the only way you can bring everyone on board to achieve your goals and targets,” he added.

He also reminded them to court the support of all stakeholders to confront challenges in the area of Security issues, Low Mobilization of Revenue, sanitation and waste management issues, unbridled development, development in waterways, temporary structures, Health, Education among others.

She also thanked the Traditional Authorities, Assembly members as well as the general public for their support and pledged her commitment to the “Make Accra Work Again agenda.”