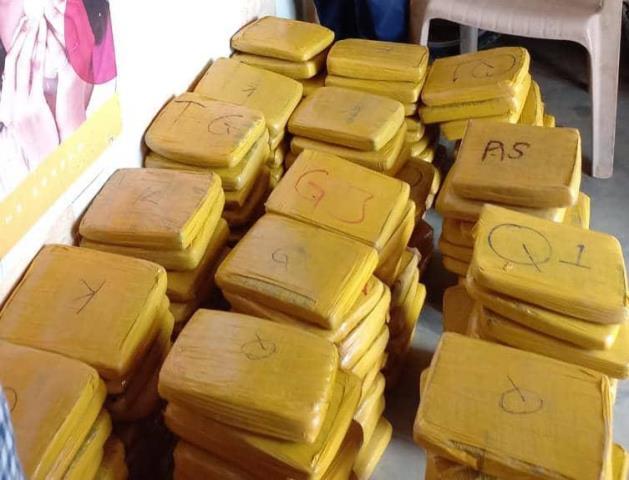 The parcels were being transported in a blue-black ‘Opel Astra’ vehicle with registration number AS 8242 V.

Some of the square-shaped parcels have labels like “P”, “Q1”, “KK”, “PS”, “AS”, “K”, “TG”, “G3” and “Q”.
Deputy Superintendent of Immigration (DSI), Courage Kwame Amegbe, in-charge of Joint Patrol Team (Operation Calm Life), Leklebi Dafor, who spoke to the Ghana News Agency (GNA) disclosed that the parcels were intercepted on Thursday, at about 1530 hours.

He said the vehicle was on its way to Accra when the Team upon a tip off made a road block for snap checks.

DSI Amegbe said the driver upon sensing danger while he got closer to the Team, sped off.
He said the Team chased the driver, who decided to use an unapproved route around Logba-Tafi leading to Kpando.

The Deputy Superintendent said the driver, realising that the Team was still after him, stopped the vehicle, removed the key and ran away.

He said the Team could neither apprehend the driver nor moved the vehicle hence they towed it and brought it to the Golokwati Police Station.

A 25-year-old man, known as Adzamli Donne from Anlo who came to the Police station claiming ownership of the vehicle was arrested by the Police.

DSI Amegbe noted that Adzamli’s arrest would lead in knowing the driver who ran away to enable his arrest as well as know who the parcels belonged to.
He said it was not advisable for people to engage in illegal businesses, adding that “our mode of operation does not change”.

The Deputy Superintendent said they continued to patrol through unapproved routes and sometimes “hit the road” upon intelligence.

The parcels have been handed over to the Volta Regional Narcotic Control Commission for further investigations.