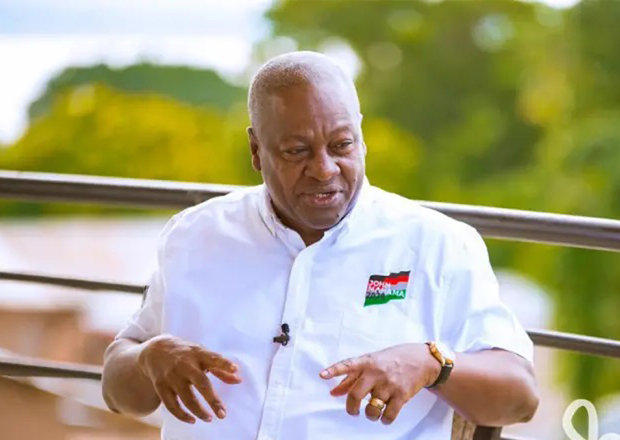 The Presidential candidate of the National Democratic Congress (NDC) in the 2020 election, John Dramani Mahama, has extended his nationwide ‘Thank you Tour’ to Prestea in the Prestea Huni-Valley Constituency of the Western Region.

The one-day tour was to express his appreciation to members of the NDC and his supporters for the votes he obtained in the December 7, 2020, polls.

The former President who was accompanied by Professor Jane Naana Opoku Agyemang, vice-presidential candidate, Johnson Aseidu Nketiah, General Secretary of the NDC, national, regional and constituency executives, first paid a courtesy call on the Divisional Chief of Prestea-Himan Traditional Area, Nana Nteboah Pra IV.
The team later interacted with some religious leaders and ended with a mini rally in Prestea.

Addressing the Divisional Chief of Prestea-Himan and his elders, former President Mahama said “We began our visit in the Northern region and continued to the Bono, Ashanti and Ahafo Regions. In those Regions we had our programmes at the various regional capitals, but in the Western Region we decided to have it in Prestea because of the massive votes the NDC had here”.

He said “The support we had from residents of Prestea helped us to win the parliamentary seat back from the New Patriotic Party (NPP) as our votes increased by almost 20,000. We added four more seats in the Western Region”.

He explained further that “For Presidential our votes increased from over four million in 2016 to about six million in 2020 election. We give thanks to all those who have worked hard to bring the NDC this far. We have learnt a lot from the previous election and hope to avoid those mistakes”.

Nana Nteboah Pra IV thanked the former president and his entourage for the visit, stressing that “our leaders should try and manage our resources effectively so as to reduce the rate at which we seek foreign aids”.

Touching on the Lesbian, Gay, Bisexual, Transgender, Queer and Intersex (LGBTQI +), “I believe human rights activists have been given too much space to influence certain decisions. There have been different views on this issue based on both religious, traditional believes and values,” he stated.

The Divisional Chief emphasized that “As traditional authorities we will continue to let them know that our culture does not allow such deviant behaviours”.
GNA