The Minister of Health, Kwaku Agyeman-Manu, has commissioned two Community-Based Health Planning Services (CHPS) compounds for the Akyem Mampong, Ahankrasu communities in the Atiwa East District of the Ashanti region.

The Ahankrasu CHPS compound also consists of a main clinic, a one-bedroom staff facility as well as a two-bedroom facility. 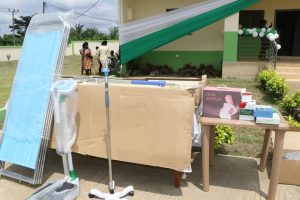 The compounds constructed at a cost of about GHS 1,304,646.02, forms part of the Ministry’s goal to attain Universal Health Coverage (UHC) as well as the Sustainable Development Goal ‘3’ by 2030 of which the CHPS system is a major contributor to its achievement or otherwise.

Mr. Agyeman-Manu said the CHPS compounds would offer ante-natal and post-natal services, as well as consultation and counselling adding that as part of efforts by the government to improve health care service in the region. 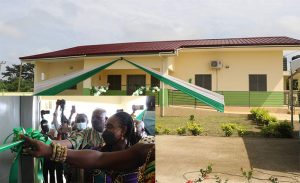 He therefore encouraged the public to keep their faith in the NPP government stating, “Putting up of these infrastructure projects are not being done for the sake of it but they are part of a broad strategy of improving geographical access in health care thereby reducing the impact on the reduction of the burden of maternal and child health morbidity and mortality.”

Mr. Agyeman-Manu urged the management of the facility to ensure proper maintenance culture adding, “I am nevertheless concerned about the poor maintenance culture and would like to call on the management of this facility and people of this district to establish a planned preventive maintenance program as this is the only way we can assure that the facility continues to be beneficial to the people of Akyem Mampong and indeed the entire nation.

The Sustainable Development Goals (SDGs) is an initiative of the World Health Organization to promote development around the world. SDG 3 targets the promotion of good health care across all countries in the world. In order to achieve this goal, the current government has stated its commitment to building enough health care facilities in the country.