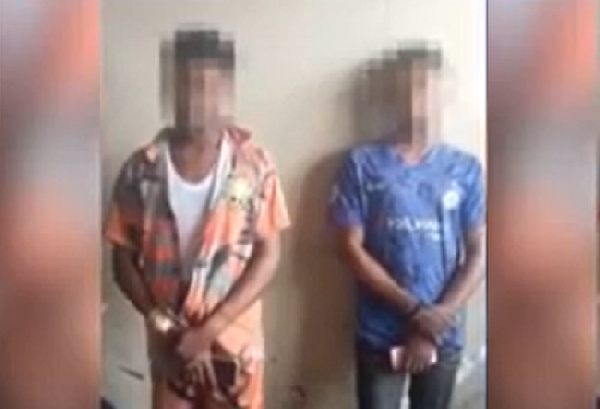 We are looking for reportedly ‘shot, missing’ Shatta Wale

Police at Kasoa New Market in the Central Region have today (October 14, 2021) arrested two young men suspected to be homosexuals, according to multiple news outlets including Adom TV and Metro News.

The two, whose names were given as Prince Nyator, 22 years and Evans Amoah, 23 years were picked up after the owner of a restaurant they worked at reported them to the police.

A Metro TV reporter in the Central Region confirmed that they were reported after a bloody disagreement ensued between them.

The disagreement left Nyator with knife wounds allegedly inflicted by a group contracted by Evans because Nyator had refused to continue their amorous relationship.

The report said it was Evans who managed to convince Nyator to join him in Kasoa from the Volta Region after securing him a job and accommodation. They met via social media.

The Metro TV reporter confirmed that the two had not suffered any attacks and remained in Police custody.

The development comes at a time the issue of same-sex rights is dominating the public discourse as Parliament readies to debate an anti-LGBTQ+ Bill initiated via a Private Members’ Bill.

The Bill, known as, the Promotion of Proper Sexual Rights and Protection of Ghanaian Values Bill 2021 has passed the first reading and subsequently referred to the relevant Committee.

Parliament has received memos arguing for and against the Bill and is expected to debate it when the house reconvenes later this month.