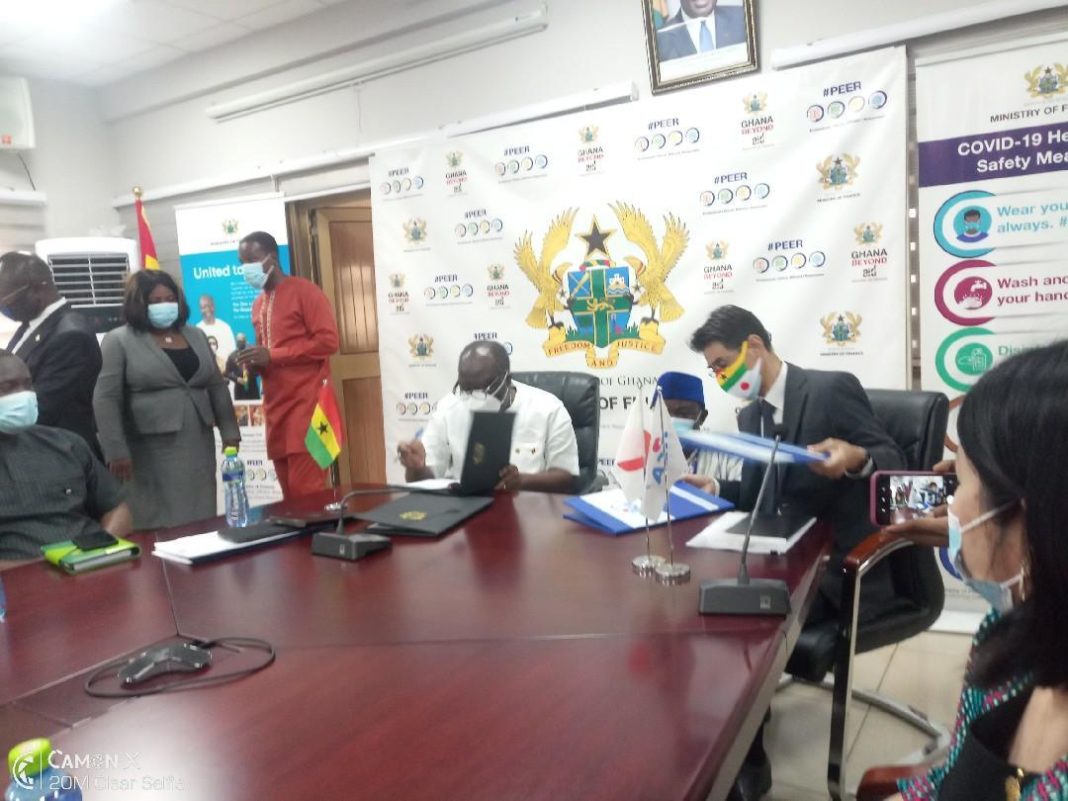 An additional support of $3.30 million is being provided to top-up the funding amount for the rehabilitation of National Truck Road N8 Phase II.

This brings the total amount for the N8 project to approximately $60.38 million.

The grant will make a significant contribution to Ghana’s transportation sector, especially given the increase in vehicular traffic, combined with a rapidly growing urban population.

The two projects would facilitate trade and transit in the West Africa sub-region, improve safety along the corridors and boost trade in the local economy.

Mr Ofori-Atta on behalf of the People and Government of Ghana expressed gratitude to the Government and People of Japan for their kind gesture.

He also thanked them for their appreciable contributions to Ghana’s development efforts over years.

In addition, the Minister expressed his heartfelt appreciation to Japan for its COVID-19 support to Ghana.

Mr Ofori-Atta noted that the COVID-19 pandemic had had a debilitating impact on Ghana and many other places.

He said Ghana like most countries had really been hit by the COVID-19 pandemic and its attendant economic and social impact, however, even as there was a contraction in the region of about three per cent, “the Government managed to get a positive economy. growth of about 0.4 per cent due to the strong economy that we have built in the first four years of the administration.”

He said Ghana was one of the six-top countries with regards to their response to the COVID issue; and that about 10 per cent of Ghana’s population had had one or two doses of the COVID-19 vaccine.

He said the Government would continue to aggressively pursue the COVID-19 vaccination programme.

On his part, Mr Araki said the Tema-Motorway Roundabout Phase II Project would further improve the function of the interchange.

He said the project would positively contribute to the operation of the Tema Harbour directly and facilitate trade between Ghana and her neighbours such as Togo, Burkina Faso and the Ivory Coast.

He said the additional grant amount for the rehabilitation of the N8 (Phase II), which was currently ongoing, had become necessary to bridge the costs incurred from the adverse effect of the COVID-19 pandemic, which resulted in the temporal suspension of construction work.

He reiterated that JICA would continue to work in close collaboration with the Ministry of Roads and Highways, the Ghana Highway Authority and stakeholders to ensure that the two projects were successfully implemented.

Mr Araki said JICA had been utilizing Japanese technological capacity to the maximum extent to contribute to the economic and social development in Ghana.

“Japanese cooperation has contributed to providing over 760 kilometres of national trunk roads, a number bridges in the past.”

Minister of Roads and Highways, Kwasi Amoako Atta, in a speech read on his behalf, urged the Ministry Finance, JICA and the Ghana Highway Authority to ensure that the focal persons for the two projects were well resourced to undertake their assignments, saying, “Let’s ensure that no bottleneck was placed in the way of project implementation”.
GNA