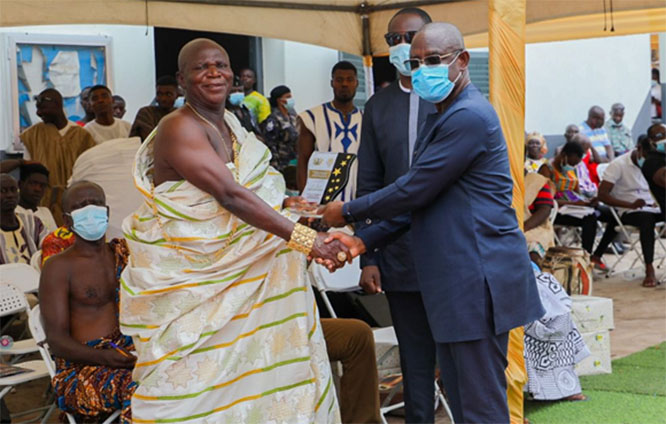 CHIEF EXECUTIVE of Ghana Cocoa Board, Hon Joseph Boahen Aidoo, has been honoured by the Chief of the Akwapim Mampong Traditional Area and conferred with the title, Cocoa Boafopa for his contribution to historic strides within Ghana’s cocoa sector.

The prestigious award was conferred during the grand durbar of chiefs and people of the area to climax this year’s Ohum Festival.

Hon Boahen Aidoo is credited with spearheading the introduction of several laudable interventions to increase productivity and improve the living standards of cocoa farmers.

Experts say the successful implementation of the Productivity Enhancement Programs (PEPs) significantly contributed to the attainment of the recent cocoa production record of over 1.045 million metric tonnes.

The Akwapim Mamponghene, Osabarima Kwame Otu Dartey III, while commending efforts by Hon  Aidoo, reminded him of the Akwapim Mampong Traditional Area’s pioneering role in the cocoa sector and called for more investment in cocoa projects within the area.

He cited the Jubilee Cocoa Project as one major project that needed urgent attention to turn around the economic fortunes of the area.

Deputy Chief Executive of Ghana Cocoa Board in charge of Operations, Dr. Emmanuel Opoku, who represented Hon Boahen Aidoo at the function, expressed appreciation to the chiefs and people for honouring the Chief Executive.

Dr. Opoku assured the chiefs that a proposal to turn the Jubilee Cocoa Project into a cocoa museum was before the Board of Directors for consideration.

He added that a proposal for the establishment of a tertiary educational fund for research into the cocoa sector was also under consideration.

He said COCOBOD would continue to invest in projects to build local capacity in an effort to industrialise the cocoa sector.

As part of his contribution to the development of the area, the COCOBOD chief made a personal donation towards the building of the chief’s palace.

The board also presented cocoa products and other  items towards the celebration of this year’s Ohum Festival.

Man arrested for locking up his kids inside water drum

Homos3*xuality is a threat to human existence; we need to end it – Dr Okoe Boye » ™