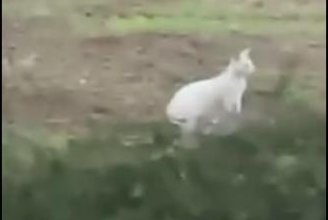 Oct. 13 (UPI) — A British farmer planting barley in his field captured video when he spotted something surprising — a white wallaby hopping loose.

Jack Smith, 19, said he was planting barley Tuesday in his field near Kenilworth, England, when he saw the unusual animal.

“I saw it in the hedge and thought it was a rabbit or a cat,” Smith told the BBC, “but then it started hopping away.”

White wallabies are native to Bruny Island in Tasmania, Australia.

Smith said his friends were in disbelief when he showed them his video.

“People thought I was in Australia,” he said.

RSPCA officials said red-necked wallabies are known to exist in the wild in Britain as a result of animals escaping from captivity, but the white wallaby spotted by Smith most likely was an escaped pet or private zoo animal.

“Our advice to people who spot a wallaby in the wild is to watch from afar and don’t try to approach them,” an RSPCA representative said.