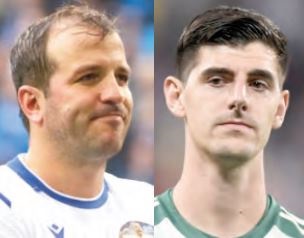 Caf CL: We’re optimistic of win – Hearts of Oak board member ahead of WAC trip

Man goes on trial over plane death of footballer Sala

Thibaut Courtois has been told to quit ‘whining’ over the amount of games in the football calendar by Dutch pundit Rafael van der Vaart.

The Holland star-turned-pundit has become particularly outspoken since retiring from the game and his latest issue came after Courtois slammed UEFA for hosting a third-placed play-off for the Nations League.

“I think it’s silly,” Van der Vaart said during an appearance on Nederlandse Omroep Stichting (NOS) as a pundit for Holland against Gibraltar, via Voetbalmagazine.

“You then have six months of vacation. You only play football, a club pays you a lot of money… of course the match schedule is very busy, but we have all been through that.

“Competitions are the most fun there is. They are whining.”

Courtois refused to be silenced in the build-up to the third-placed play-off – which Belgium lost – as he likened players to ‘robots’ in the current system.

“This game is just a money game and we have to be honest about it. We just play it because for UEFA it’s extra money,” said Courtois.

“Next year we have a World Cup in November, we have to play until the latter stages of June again. We will get injured. Nobody cares about the players any more. If we never say anything it will be always the same.”

But Van der Vaart doubled down on his criticism and suggested that a goalkeeper of all players cannot point to tiredness as “it’s standing there a bit.”

Caf CL: We’re optimistic of win – Hearts of Oak board member ahead of WAC trip

JUSAG To Embark On Strike On October 28