Some persons have gone for money to ‘make noise’ about LGBTQ+ 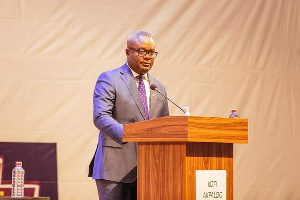 The 2020 Presidential candidate of the Liberal Party Ghana (LPG), Percival Kofi Akpaloo, has accused the sponsors of the Anti Lesbian, Gay, Bisexual, Transgender, Queer (LGBTQ+) Bill currently in Parliament of receiving bribes from some donors for the promotion of the bill.

According to him, persons promoting the anti LGBTQ+ bill, especially Parliamentarians, have been paid to propagate such an unpopular cause as a means of causing confusion in the country.

“We need to take our time and listen to ourselves because all of a sudden there is immense noise surrounding this issue. They have gone for money to create all this noise. I say they have been paid just to create and spark conversation in the country” he said on Angel FM’s Anopa Bofo Morning show.

He noted that he has failed to understand the need for the bill and therefore believes the lead advocates must take a second look at it.

“I say the bill will neither be passed today nor tomorrow so you can mark it on the wall,” Akpaloo told host Kofi Adoma Nwanwani.

He fruther observed that the proposed five year jail term in the bill for persons who are caught practising LGBTQI+ activities does not make sense to him since it will end up promoting the act instead.

“Aren’t the persons who will be accused of being gay going to share the same prison cells with some inmates who are not gays? What is the probability that they won’t influence them negatively?,” he quized.

He also refuted the assertion that LGBTQ+ is being imposed on Ghanaians by foreign countries arguing that no individual has been coerced to promote the act here.