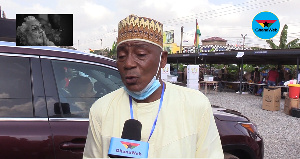 The Trade Minister’s representatives led by Boniface Abubakari Sadiq and Issahaku Kotomah also made donations of undisclosed cash amounts and other stuff to support the family.

Their visit was warmly welcomed by the family and many others.

Dr Sheikh Osman also known as Olando died in his private residence at Old Tafo in Kumasi on Thursday morning.

He served as the Chief Executive Officer of the Muslim Executive Foundation and secretary to Supreme Council for Islamic Teachings and Research.

Speaking at the event, Boniface Abubakari said the Late Dr. Sheikh Osman was a patriotic citizen and a man of integrity given how he imparted lives in Zongo communities.

“He was a peaceful unifier and a practical teacher to everybody who encountered him,” he said. “It is thus understandable why the Minister of Trades and Industries, Hon Alan Kyeremanten deems it expedient and highly imperative that he be visibly represented on this occasion.”

Late Dr. Sheikh Osman brought light into the lives of several children and adults through his generous activities.

Many residents mourn his passing describing it as a blow to close relatives, the entire Muslim community and Ghana at large.

His death brought together Muslim scholars, chiefs, businessmen among others.

The late Dr Sheikh Aransah was buried at the Tafo cemetery.

His burial was one of the most memorable events in the Ashanti region.

Dr. Sheikh Olando served as the Chief Executive Officer of Muslim Executive Foundation and secretary to Supreme Council for Islamic Teachings and Research.

He was 63 years old and left behind six children – 3 sons and 3 daughters.

Dr Sheikh Olanda Aransah lost his wife, Hajia Maliya Ibrahim, on September 7, 2020, just a year before his passing on.