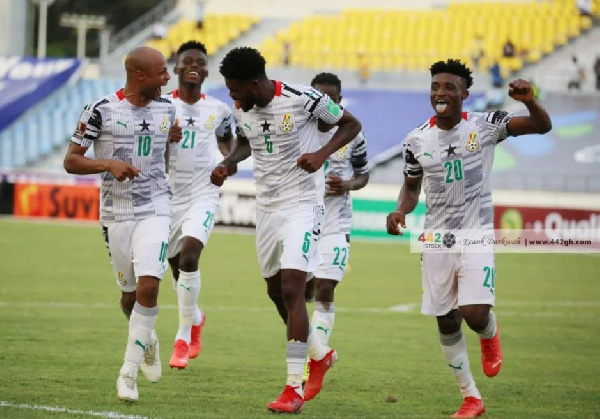 After a 3-1 home win against Zimbabwe on Saturday, the Black Stars of Ghana are scheduled for the second game of their doubleheader against the Warriors.

The Black Stars moved on to six points from three games following their win in the last game in Cape Coast in the the Group G match.

Zimbabwe started their qualifying campaign with a dazzling point, holding the much-hyped South Africa to a goalless draw at home in September.

They were soon to be defeated in Ethiopia as they were undone by a 94th minute penalty that the hosts converted through Aschalew Tamene even though the Warriors held the home side until the late goal.

The Warriors were dealt another loss in a row the last time they played, and their journey to Ghana ended in losing 3-1 despite the presence of talented Knowledge Musona who drew them level not long after the break.

Norman Mapeza’s team now head into the game on Tuesday, with the opportunity to revenge on Ghana and improve their fortunes in order to maintain their hopes of being able to qualify for the global tournament to be held in Qatar.

Ghana started the group phase in September with a narrow win against Ethiopia with Mubarak Wakaso scoring the sole goal of the match after about half an hour.

Milovan Rajevac’s team were in the wrong place for an important game away from South Africa, with Bongokuhle Hlongwane scoring for the hosts to win 1-0 and secure the top spot of the table.

The Black Stars made a return to winning ways after the last time they played, when they hosted Zimbabwe.

Mohammed Kudus instantly put the Black Stars ahead but Musona pulled the visitors back before Thomas Partey restored his nation’s lead . Andre Ayew pushed the game out of reach by scoring a third goal in an 87th minute.

With just one team qualifying for the next World Cup from each group, Ghana will look to keep their feet in the wake of the group leader South Africa, who sit just one point better than them and will be eager to achieve back-to-back victories on Tuesday.

Knowledge Musona will remain as a vital component in Zimbabwe’s squad on Tuesday after he scored an equaliser in the game against Ghana their previous clash on Saturday.

Jordan Zemura has impressed since his introduction to the Bournemouth first-team this season, and should be able to keep his spot in the middle.

Aston Villa midfielder Marvelous Nakamba is one of the main players to keep an eye on for the Warriors while Tendayi Darikwa who has wealth of knowledge will be missing becauae of a family emergency in the UK.

Ghana have a team that is filled with skilled players, such as Captain Andre Ayew, who has scored 20 goals in international competitions.

Jordan Ayew should continue to lead the way in his quest to end a absence on an international level.

Arsenal midfielder Thomas Partey is arguably the most important player for the team. Partey will be vital in the fight for the middle.

We do not expect the difference in home advantage being a significant influence on the final scoreline on Tuesday, and we expect an identical scoreline between the two teams.

Ghana has a far superior team than Zimbabwe and are determined to put the pressure on group leaders South Africa with another dominant win.