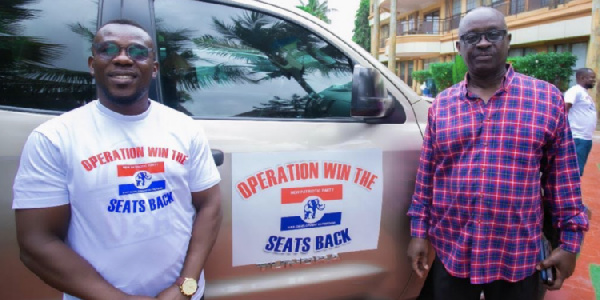 Dr. Addom Tufuor (r) is the founder and Director of Operation for the Group

Members of “Operation Win the Seats Back” led by Dr Adom Tufuor has taken up the challenge of re-capturing the Akwatia Constituency seat for the New Patriotic Party(NPP) after President Akufo-Addo expressed disquiet over of the loss upon his visit to the Constituency.

Speaking at a durbar of Chiefs held in his honour at Akwatia in the Eastern Region, President Nana Addo Dankwa Akufo-Addo said that the New Patriotic Party of Ghana (NPP) lost a lot of Parliamentary Seats which “we should have won in the 2020 Elections. One of such Seats which hurt me the most was the Akwatia Seat,…but I can assure you that in 2024 we will do everything within our means to regain that seat.”

“Operation Win the Seats Back” has taken it up to reclaim the seat and many others the were lost in the 2020 elections, assuring the President, Nana Addo Dankwa Akufo-Addo and the NPP the Group backs him and party.

“Operation Win the Seats Back” is a pro-NPP Group that has targeted thirty-two (32) of the Parliamentary Seats that the NPP lost in Elections 2020 with the aim of winning the Seats back through re-strategizing, improved communication training, and the MASSIVE trumpeting of the numerous achievements of the Akufo-Addo/Bawumia government.

These are but a few of the strategies the group intend to use to help the NPP “Break the 8” in Elections 2024.

“Operation Win the Seats Back” believes in the preservation of President Akufo-Addo’s legacy and we will do whatever it takes to ensure that this is done.

Twenty-nine (29) men and women from eighteen (18) Constituencies in 5 Regions (Oti, Western, Central, Eastern, and Greater Accra) participated in this event.

The Participants are currently working in their various Constituencies to ensure that the NPP retains power in 2024 and thereby “Break the 8”.