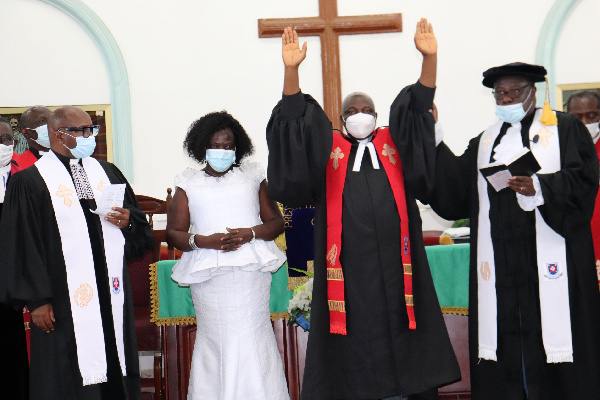 The Ga West Presbytery Church of Ghana (PCG) has inducted Rev Enoch Adjei Pobee into office as its new chairperson.

A Chairperson of Presbytery in the Presbyterian system of governance is equivalent to a Bishop of a Diocese in an episcopal system.

A church service held to commemorate the event took place on Sunday, September 3, 2021 at the Emmanuel Congregation of the Presbyterian Church of Ghana, at Dansoman in Accra.

Preaching the sermon on the occasion, Rev. Prof. Mante urged the new chairperson to endeavour always to rally members round in the performance of his duties. He reminded Rev. Adjei Pobee of God’s calling to serve the Presbyterian at this time of his ministerial career and urged him to work hard to see to the spiritual, administrative and material needs of the presbytery.

Rev. Prof. Mante also urged the Ga West Presbytery to support the new Chairperson to enable him to deliver what is best for them.

In his address, Rev. Adjei Pobee said he had accepted the onerous duty placed on him as the Chairperson in all humility and added that he was thankful to God and to his predecessor. The new Chairperson said he would be counting on the support and cooperation of all constituents of the Ga West Presbytery and pledged to deliver as was expected of him.

He said he would strive to empower the many Presbyterian congregations in districts that had daunting challenges and make them self-sustaining to speed up the growth of the Church in the area. He added that he would work hard and operate an open-door policy.

He paid a growing tribute to the outgoing Presbytery Chairperson who happens to be the first Chairperson in the person of Rev Daniel Amoako Nayrko for steering the affairs of the Presbytery since it was created to this far.

He commended him and his team for the construction of new residence for the Chairperson and ensured a systematic growth of membership.

Outlining his vision, the New Chairperson for Ga West said he would ensure that a new administrative office complex is constructed which would also be used for commercial purposes to generate more income for the Presbytery.

He also mentioned that evangelism would take the centre stage of his administration to win more souls for the Kingdom of God in order to achieve the Vision 1.5 agenda set by the Church.

The Rev. Enoch Adjei Pobee was born on September 3, 1963 at La- Accra in the Greater Accra Region.

He had his ministerial training at the Trinity College (now Trinity Theological Seminary, Legon) between 1989 and 1992. He was commissioned by the Church, 29 years ago in La and ordained 27 years ago in Somanya in the Eastern Region.

Rev. Adjei Pobee holds a B.A. (Hons) in Political Science and Religion from the University of Ghana, Legon and Master of Theology (Mission & Ecumenism) from the Trinity Theological Seminary, Legon.

Rev. Adjei Pobee has international exposure and experience. He was the Minister in Charge of the Ghanaian Presbyterian Church, Toronto – Canada (2003 – 2008) He also participated in conferences in the United States of America and Nigeria organized by the Stony Point Presbyterian Centre and the Baptist Seminary-Ogbomoso, Nigeria respectively.

He is married to Mrs. Ernestina Asor Pobee and they are blessed with three young adults: Priscilla, Abigail and Philip.