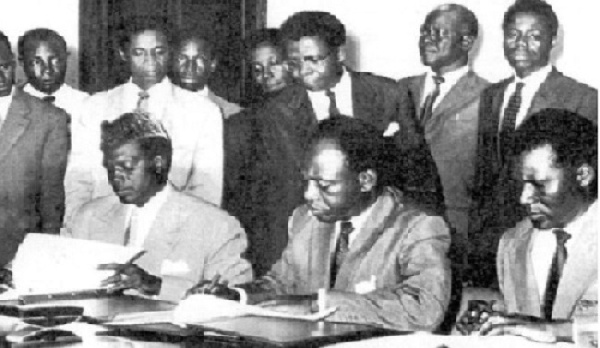 • Ghana is committed to a three-nation pact shortly after independence

• As ECOWAS chair, he has been involved in political ongoings in both Guinea and Mali

His comments were to the effect that Ghana had a long-standing relationship with both countries dating to the independence days, stressing that his government was committed to reinforcing those ties.

Akufo-Addo in a French address to Malians and Guineans living in Ghana assured them that political events back in their home countries were of concern to ECOWAS and that the regional bloc he is chairperson of was only committed in ensuring that constitutional rule is reestablished.

“You have been here with us for a long time, you have been our brothers, sisters and neighbours. What ECOWAS wants to do in your country is not to make enemies in Guinea or Mali but to entrench democratic principles of the bloc.

“As soon as possible, we hope for a legitimate government in both countries. It will consolidate the ties between all ECOWAS nations which comprises Ghanaians, Guineans and Malians.

“We are never enemies, we are friends and comrades, more so for Ghana, Guinea and Mali which had a long union since our respective independence. We are proud of that union and will do everything possible to reinforce all such relations in order to exit this crisis,” he said.

Akufo-Addo spoke on Kumasi-based Pure FM on October 5, as part of his media engagement in the region during his four-day tour.

Akufo-Addo has in the last year visited Mali and Guinea after the military overthrew civilian presidents in both countries. It was under his chairmanship that ECOWAS expelled both countries and ordered an immediate return to civilian rule.

Soon after Ghana’s independence from Britain in 1957, Guinea also led by Ahmed Sekou Toure, defied French colonial expectations in another intriguing story in 1958 to become only the second country in sub-Sahara to declare independence.

Leaders of the three countries signed a pact to that effect. It fell within the larger dream of Nkrumah to see a united Africa. Nkrumah after his overthrow in 1966 was co-president with Sekou Toure till his death.

With additional files from Face2FaceAfrica.com