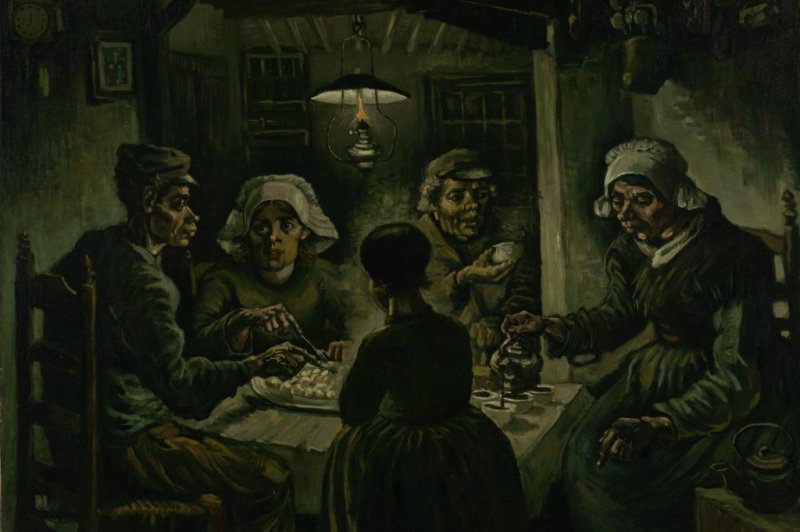 The exhibition, “The Potato Eaters. Mistake or Masterpiece?” opens Friday at the Van Gogh Museum in Amsterdam. It includes the 1885 painting in question — one of only a few artworks the Post-Impressionist painter considered among his best — as well as dozens of other paintings, sketches and letters to tell the story of the piece.

While van Gogh thought the painting was a “masterwork” and hoped to break into the Parisian art market with it, public reception was critical.

The painting features a family of five peasants eating a meal around a sparsely lit table. Van Gogh used a dark palette to depict the hunched, morose figures. Unlike other artists of the time, the museum said, van Gogh didn’t wish to romanticize the life of peasants.

Among the letters displayed in the exhibit are letters from van Gogh’s friend, fellow artist Anthon van Rappard, who offered a scathing opinion of The Potato Eaters:

“Why may that man on the right not have a knee or a belly or lungs? Or are they in his back? And why must his arm be a meter too short? And why must he lack half of his nose?” van Rappard wrote.

“Come on! Art is too important, it seems to me, to be treated so cavalierly.”

Archives of van Gogh’s work indicate, though, that he returned to the subject five years later, during his time in an asylum in Saint-Rémy-de-Provence in France. He sketched another version of the family meal with an eye toward painting it again.

The artist sent a letter to his mother and brother, Theo van Gogh, asking them to send him drawings for inspiration to make another painting of The Potato Eaters.

“I’m thinking of redoing the painting of the peasants eating supper, lamplight effect,” he wrote, according to The Guardian. “That canvas must be completely dark now, perhaps I could redo it entirely from memory.”

He never got a chance to repaint the scene, having died by suicide in July 1890.

The museum is displaying the later sketches for what may be the first time.

“In 1890, he is in Saint-Rémy, he is longing for the north as he has not been home for five years. He comes back to The Potato Eaters figures and starts drawings of interiors and figures at the dinner table, and some of these are drawings that have not been on display for such a long time that our records even suggest they were never shown,” curator Bregje Gerritse said.

The exhibit will be on display at the Van Gogh Museum in Amsterdam through Jan. 16.