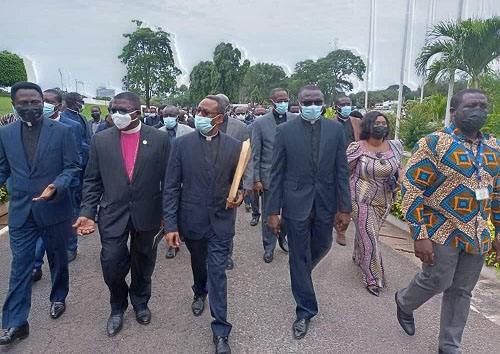 The clergy on their way to Parliament House

Christian groups in the country say new voices pushing for the rejection of the bill seeking to criminalize activities of LGBTQ+ people in Ghana are a stark reminder that the Ghanaian society is vulnerable to same-sex marriage.

They have urged the government to stop what they called “the creeping crisis” before it is too late and want the door to be shut on any LGBTQ+ agenda now.

The Promotion of Proper Human Sexual Rights and Ghanaian Family Values Bill, 2021, is under consideration by the Parliamentary Select Committee on Constitutional, Legal and Parliamentary Affairs after it was introduced in Parliament on August 2, 2021 and read for the first time in the House.

Recently, a group of Ghanaian intellectuals called on authorities to reject the bill, arguing that the proposed law will violate the right to “inviolability of the person” and all the key fundamental freedoms guaranteed under the Constitution.

Presenting various memoranda to the Committee on Constitutional, Legal and Parliamentary Affairs on Wednesday, the Christian groups argued that the proposed law, when rejected, could provide fertile grounds for same-sex marriage to fester.

Chairman of the Church of Pentecost, Apostle Eric Nyamekye said “our concern is not about today; it is about the future. Today, if we let in this LGBTQ+ [to fester] it means we are going to accept same-sex marriage.”

According to him, LGBTQ+ movement is “an insult to the intelligence of God, the Creator,” saying, “They are just trying to tell God that He didn’t think enough, and that this is how it should have been.”

He said “If you have a society where there is no absolute, soon there will be no law and we have to be very careful, and our lawyers who are arguing for all these ought to know that the matter on the floor is not about rights but it is about morality.”

He said the Church of Pentecost with a population of 3,196,605 is rooting for the ‘Promotion of Proper Human Sexual Rights and Ghanaian Family Values Bill, 2021.’

The Pentecost Church Chairman encouraged Members of Parliament (MPs) to argue well and know that they are creations of God, noting “They didn’t come out of apes and so they should not use science as the basis.”

“We have written six memoranda with 15,000 signatures. Our trustees have signed, all pastors and their wives have signed and students of Pentecost Church. The six memos are coming from women, men, the youth, children, all workers and theologians,” he stated.

The Presiding Bishop of the Methodist Church of Ghana, Most Rev. Dr. Paul Kwabena Boafo said the church, from the very beginning, set its agenda right by announcing that it does not support LGBTQ+.

“Our stance is very clear. Seeing this bill put forth by the Eighth Parliament, we were so happy and today we are here representing the over a million Methodists in Ghana to say we are in support of the bill.

“We are presenting memoranda from the church, the Children Ministry which sees the bill as good, as well as the Accra Diocese of the Methodist Church, Ghana,” he noted.

President of the Apostolic Church Ghana, Apostle Dr. Aaron Ami-Narh said the anti-gay bill is important for the future of Ghana, adding that the church believes that sexual orientation should not be made fluid for anyone to pick and choose.

“No nation has what it takes to deal with that kind of confusion. We also believe that God exists and made us male and female,” he indicated and added that church stands for the bill.

Other church leaders also presented memoranda and spoke in support of the bill.

He assured members of the Christian groups that their memos would be tabled before the Committee for consideration, pointing out that further presentation could be made to the committee during stakeholder’s conference.